ghoghnos blog > Uncategorized > The Art of Minakari in Iran 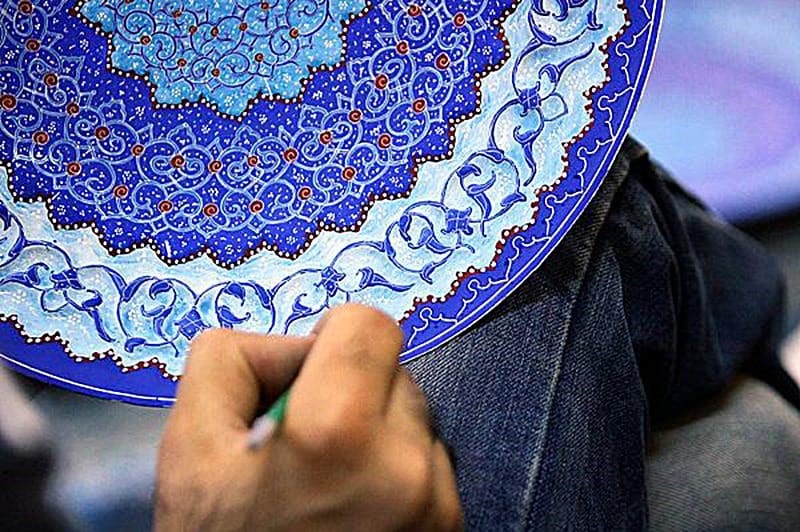 Have you ever looked at a piece of art and seen layers and layers of the sky unfolding across its surface? While the azure of the skies cascade in concentric circles, shapes of heavenly flowers and mysterious birds appear repeatedly in eternal patterns of heavenly grace. This is a form of art called “Minakari” in Persian language. The significance of this Iranian handicraft comes from the intricacies of Iranian art and culture, embraced by its long history. If you like to learn more about this exquisite Iranian handicraft, then this article is for you.

• What is the meaning of Minakari?

• How old is this form of Persian art and how has it developed during the centuries?

• What is Minakari and how is it made?

• What types of Minakari artefacts are produced?

• What makes Minakari products so special?

What is the meaning of Minakari?

“Mina” is defined as the blue sky in Farsi. It is also associated with the word Minoo, which means the heaven. The handicraft itself embodies the azure of the sky in its multiple layers that seem to be moving towards eternity. This is perhaps one of the reasons for calling the artwork mina, or a representation of the sky. The closest equivalent to this form of art is enameling, also called vitreous enamel or porcelain enamel. Enameling is applied to several substances such as metal, stone, glass, ceramic and pottery.

How old is this form of Persian art and how has it developed during the centuries?

While enameling is as old as the oldest civilizations of human history, such as the Egyptians and the Roman Empire, Minakari dates back to at least five thousand years ago in the Iranian plateau. Numerous pieces of jewelry and objects used for decorative arts glazed with enamel and Minakari have been unearthed in various parts of the world, testifying to the widespread popularity of this handicraft since ancient times.
The earliest examples of Minakari date back to the Achaemenid period. Even though there is evidence that the artwork was produced during the centuries that followed, it was only during the reign of the Seljuk dynasty (early 12th century) that this type of art started blossoming.
Later on, the Mongol conquest of Iran brought the country under their control. It was during this time that new styles, patterns and shapes, such as members of the Persian court, were introduced in the art of Minakari.
Another period of significant development in this craft is marked in the Safavid period (16th to 18th centuries), when miniature was a favored style for Iranian arts. In addition to this, images of feasts in Iranian courts as well as red color were added to the images depicted on mina crafts.
The contemporary mina artifacts were revived around hundred years ago in Isfahan. Today Minakari is a highly appreciated artwork which is widely produced in Isfahan.

What is Minakari and how is it made?

Iranian Minakari or enameling is a form of art where special colors together with a coating of glass, which is also called mina glaze, are fused into a piece of metal or tile through a process that involves heating. In general, the process involved integrating a layer of glass onto another substance that can withstand high temperatures spanning from 750 to 850 degrees Celsius.
As the successful completion of the process requires the use of pure metals, metals such as silver, copper and sometimes gold are used to make this kind of valuable Persian handicraft. Fine silver is used mainly for making Minakari dishes such as bowls and spoons, boxes and works of art as the colors can fuse better with pure metals. In addition to this, copper is also widely used for making products and Minakari objects, because of its high flexibility. However, gold is mainly used for making mina jewelry, as its shine makes the pieces look brighter and more beautiful. Even though materials other than metals are also used, such as ceramics, tiles and glass, metals enjoy more popularity.
The mechanics of producing mina artifacts is quite straight forward. First, the smiths prepare and shape the object according to their desired shape. Then the piece is coated in a layer of white glaze by dipping, and heated in a temperature of about 750 degrees. The product is then covered in another layer of glaze with higher quality and reheated, a process which can be repeated several times. Different kinds of materials can be used as glaze, but usually enamel glaze of silicon, potassium, lead, tin, magnesium, boric acid, zirconium and kaolin are used for this process.
Afterwards, the product is designed with different geometric designs, symmetrical patterns, traditional themes and sometimes religious motifs. For interpreting these motifs, one has to consider the cornerstones of one of the oldest belief systems in Iran, that is Mithraism. In Mithraism, the sun occupies a significant role. In Minakari too, the medallion in the center of the mina artworks represents the sun, around which revolves the earth. Moreover, patterns of miniature and eslimi art (a kind of Islamic art) have come to add a touch of grace to minakari products. While these patterns are mainly imprinted in blue color, several other chemical and organic colors are also used, such as white, yellow, turquoise color, blue, red, brown, violet, green and black. After the final design, the product is put into the furnace for one last time to stabilize its colors and designs.

What types of Minakari artefacts are produced?

What makes Minakari products so special?

A lot of precision and taste goes into making a piece of mina object. A piece of mina has to be shaped according to the design that will later on be imprinted on it with the hands of an artist. Moreover, it has to be made durable as the heat itself can ruin the object or make the designs fall apart from the product. This is why Minakari objects are considered as types of art that are used as decorations or taken out of Iran as souvenirs.
Minakari is the product of eyes that see the depth of the skies, admire the beauty of the world around and capture the harmony of the heavens and the earth in one piece. Come to Isfahan, hold a piece of the art in your hands. Doesn’t it feel like holding the universe in your hands?

Bread in Iran: The Most Common Iranian Breads