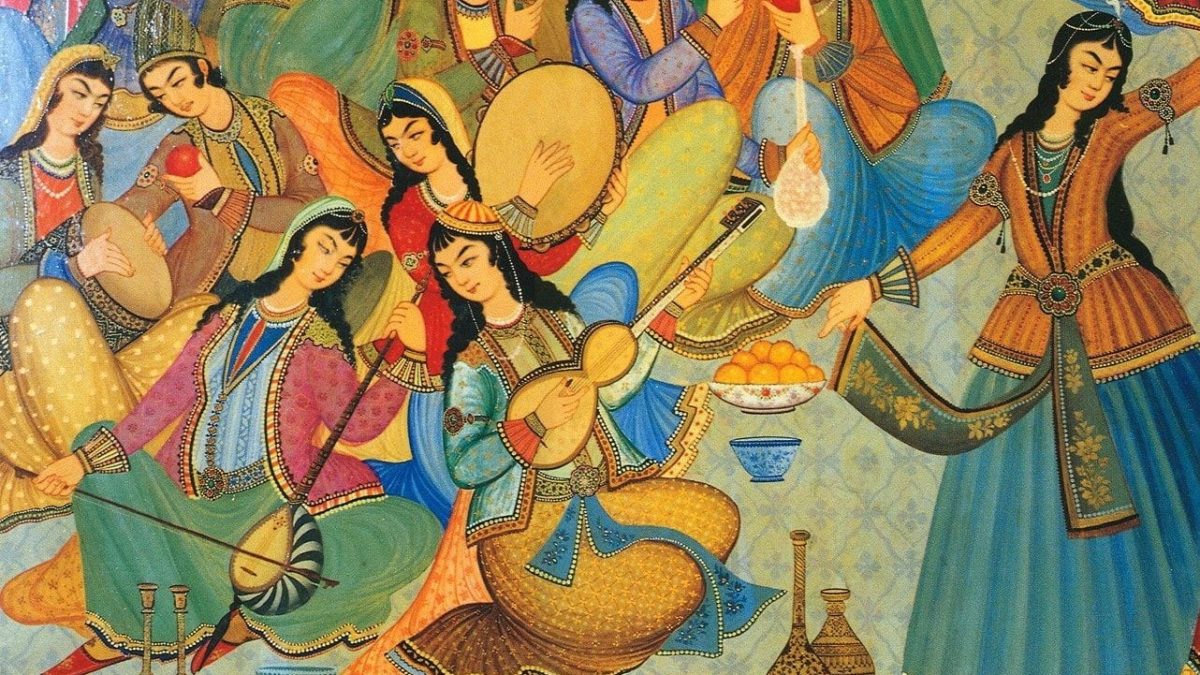 Listen to the melody of tar and setar, the everlasting instruments of Iranian art and culture will take you back in time and space, to the early days of ancient Persia. The tunes of Iranian classical music originate from the first pages of Iran’s history. Persian music is perhaps the most honest narrator of Iranian history and culture. The true mirror of the people’s experiences and emotions, speaking of their victories and defeats, gains and losses, joys and sorrows. The geographical expansions and shrinking of the country in time has incorporated and left out pieces of land and human experience that have permanently made up the collective of tunes, melodies, songs and music of Iran. Stay with us for a comprehensive history of Iranian traditional music, we will trace it to the beginning of its time and follow through to its present time.

The originally Iranian music can be categorized under two groups:

The traditional music has more of a spiritual and mental nature, in contrast to the folk music which is mainly used for recreation. The kind of music usually relies on vocal productions of a vocalist. A uniquely decorated area with rugs and candle usually hosts the musicians and vocalists playing the music.

The folk music is more interconnected with the everyday lives and emotions of normal people. It passes down through the generations by repetitive singing. As such, it encompasses a large variety of songs and music, each originating from a specific region in the country or a different group of the society. Moreover, the music includes a variety of social, historical and religious themes and contexts such as weddings, birthdays, lullabies, etc.

Little is known about music in pre-historic Iran. Let us mentally transform to the pre-historic Elam (800 BCE). By means of some historical evidence, we have come to know that the Elamites used certain musical instruments. Bas reliefs remaining from the Achaemenid era show that during the reign of Achaemenid kings, music was used for religious purposes as well as for entertainment. Musicians used several instruments such as harps, double flutes, large tambourines and lutes.
However, clear evidence of the presence and practice of Iranian music is not available until the Sassanid era in Iran (3rd – 7th centuries AD), when the chambers of the courts of Sassanid kings resonated with sound of music played live for them.
Musical heritage of the present classical Iranian music bears the names of some of the modes that Barbod, (also known as Khosravani) the musician at the court of King Khosrow II created in that period. Barbod created a musical system called Royal Modes, which modeling on the number of the days in a week, month and year, has 7 modal structures, 30 derivative modes and 365 melodies. Unfortunately, little of his notes have remained.

Despite Barbod’s achievement in the classical music of Iran, it was only after the advent of Islam in Iran (7th century AD) that the music of Iran started blossoming. As an important element in the Islamic civilization, some of the greatest thinkers and scholars of the time, such as Farabi, Avicenna, Razi, Qotb-ed-Din Shirazi, Safi-ed-Din Urmawi developed Iranian music. Their music made up the musical foundation of the Easter Islamic Empire, so much so that, Persian music became popular in the court of Baghdad.

Later on, the Mongol invasion of Iran made many changes in the social and cultural atmosphere of the country. It was during this time that Shiite Islam was established. Also, a branch of gnosis called Sufism permeated the lyrical poetry, and the conventions of Persian sonnet (called Ghazal) became the major inspiration for Persian musical and vocal styles.
While the influence of Sufism continued, a form of religious music called taaziye was developed in 17th century. During this time, because Shiism rose to higher power in Iran, religious clerics started regarding music with suspicion. As a result, a decline in the power and influence of Iranian music happened in the era.

In contrast to the previous era, the kings of the Qajar dynasty, in 19th century, were great patrons of music. It was during the reign of Nasser-ed-Din Shah that well-known musicians such as Mirza Abdollah Farahani became famous. He created the Persian radif, the basis for contemporary Persian traditional music.
In addition to this, during his trips to Europe, the Shah saw the European orchestras and learned about the styles of music. Consequently, he ordered a military band to be created and hired the French Alfred Lemair to direct an ensemble. As a result of these efforts, the first music school was established in Tehran in 19th century.
This started a trend of westernization in Persian music which grew in the decades that followed. During the Pahlavi era, more music schools were opened in Tehran and music halls were built to host numerous orchestras and bands in their concerts. Many foreign musicians and bands visited the country and gave concerts. Also, music departments were opened in universities, young musicians and composers started studying abroad, and the television broadcasted Iranian and western music shows.
A natural, yet important, result of this movement was the introduction of western genres (such as pop, jazz and rock). They influenced Iranian music, blending Iranian and western melodies. Moreover, it was during this period that modernist and nationalist styles were developed in Iranian music. Popular Iranian ballads were promoted by reinterpreting and introducing the Persian tasnif in Iranian music and combining it with western song structures. As such, Iranian musicians used a combination of Iranian and western harmonies and instruments. The 1960s-1970s gave rise to prominent singers and musicians in the history of Persian music.