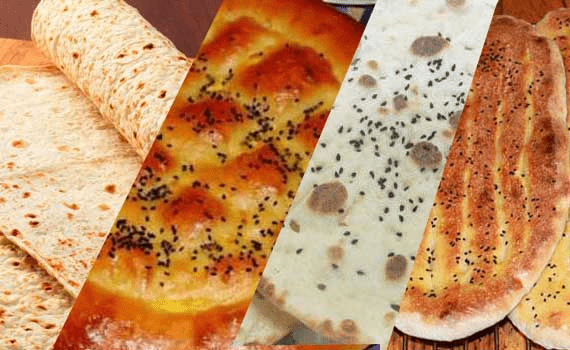 Baking bread (Nan in Persian) has been one of the vital works done by human from long time ago, as for survival of all people living in different regions of the world. History of bread and bakeries in Iran goes back to very long time ago (about several thousand years). Varieties of bread in Iran are high and it is used with almost every Persian dishes. Many types of Iranian breads have many advocates all around the world. So, here we are going to take a look at various types of bread in Iran and their specifications.

The most popular types of bread in Iran

Main material used to bake all Iranian breads is flour from different cereals such as wheat, rice, barely, and/or corn. Some of the other materials and/or nutrition can be added to bread, as well. Among main materials used in Iranian breads, reference can be made to water, oil, salt, sugar, and sometimes such nutrient seeds like sesame, or dried vegetables. Some of the Iranian breads such as Sangak are amongst the healthiest breads in the world.

One of the oldest and most original breads baked in Iran is Sangak. From past times till know the bread has been and is baked in big furnaces floor of which filled with gravels. However, nowadays in some bakeries, industrial furnaces are used but quality of bread baked in these bakeries is not as good as those baked in traditional furnaces.
Sangak is one of the most useful types of Iranian breads due to the bran available in its flour. However, it seems that this characteristic of Sangak is fading away gradually due to misuse of the flour used for Lavash by bakers (white flour with no bran in it), instead.

For people with diabetes, Sangak is considered as one of the best types of bread. Sangak is also known as doughy bread and is among one of the most popular breads in Iran.

Similar to Sangak is Barbari. Barbari is highly popular bread in Iran. However, baking soda is used in it and due to lack of bran, the bread with low nutrients used in Iranian meals.
The same white flour used for Lavash and Taftoon is used to bake Barbari; however, to make it more voluminous with more thickness, baking soda is used in it with many side effects for human body.
This has to be noted that Barbari is not good for those in diet or suffering from digestive diseases. Barbari is also known as Ashayer (Nomad) bread because they have been those who brought the bread to Tehran during past century.

It is one of the most popular breads in Iran and is somehow ticker than Lavash but thinner than Sangak and Barbari. Taftoon also has a long history of being baked by Iranian men and women; however, it keeps properties of healthy and nutritious bread as no baking soda is used in it.

In some cities and villages of the country, Taftoon still can be found being baked through old method and in traditional furnaces. Meanwhile, in some regions dried or fresh vegetables, nutrient seeds, and/or other additives are used in baking Taftoon, as local bread specified to that region. Some of the nomads and villagers also bake the bread in furnaces located under the ground; and, these types of Taftoon are known as Zanjani or Azari.

Lavash with 2mm thickness is the thinnest bread in Iran and, it is sold in packages or orders with high numbers due to its low weight and being thin. Flour with no bran and nutrition is used in the bread; however, its advantages as low price and high durability have turned it to popular bread especially in crowded and industrial cities.
Referring to many stores in the country, buying Lavash is the only option you are provided with. Other types of breads have to be used within short period of time and as they are not durable, they cannot be packaged and sold in stores.

One of the other types of bread in Iran is Nan Mashhadi which is good to be used as snack because of its low dimensions and weight. Usually Nan Mashhadi is baked in Khorasan Province and in different shapes, with wheat flour as its main ingredient. It is special form of Taftoon and sometimes some of aromatic vegetables are used in it. Nan Mashhadi is baked in traditional stone and adobe furnaces.

Shirmal is another type of Iranian bread which is very delicious and sweet and it is categorized as high volume bread and pastry. In the bread, great amount of sweet and milk is used in addition to flour, oil, butter, and egg. Shirmal is produced in different shapes like round, oval and other decorative shapes and is considered as a popular snack.

Last Words – Other types of bread in Iran

In this article we show various types of bread in Iran. In addition to the aforementioned breads, tens of different traditional and foreign breads are found in Iran, many of which just baked in some regions in the country and/or for special ceremonies. Barely bread, rye bread or buckwheat, din and cumin bread, shirmal, date bread, ginger bread, sesame bread, and various types of local breads such as Khorasani, Tiri Bakhtiari, traditional Baluchi, Borsagh or Kermanshahi, and etc. are from among the most delicious breads in Iran. If possible, buy them and taste.