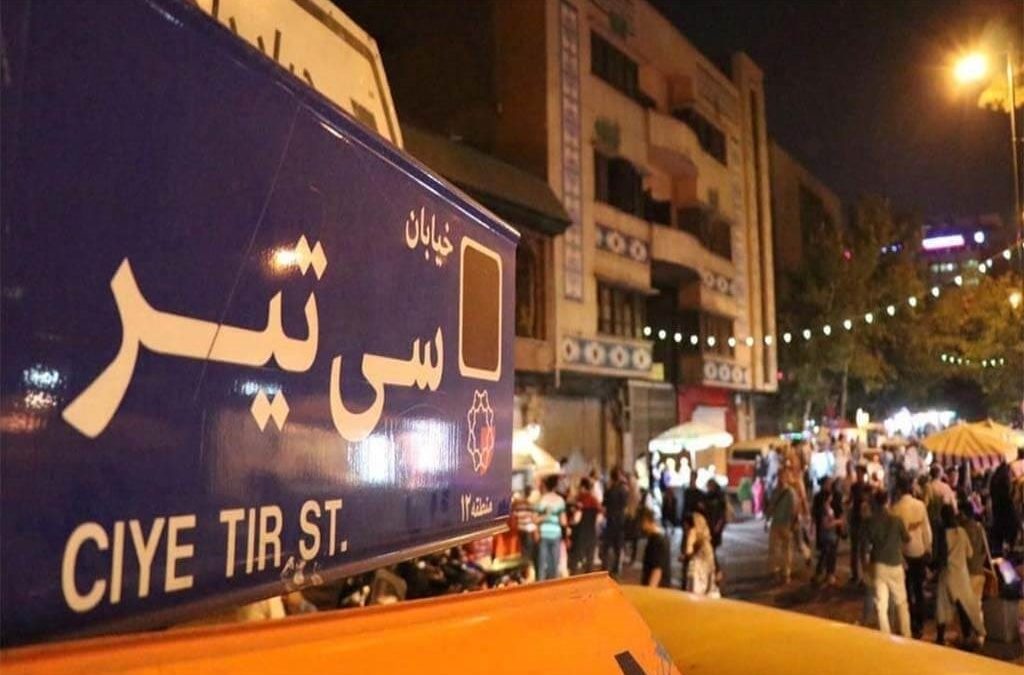 Many cities are known for an outstanding street, which attracts locals and tourists for being a night resort, and Tehran is not an exception. If you are on a Tehran travel, try not to miss visiting 30 Tir Street, where you can experience a vivid and fresh atmosphere with many hospitable people spending their long nights in Tehran. You can see hundreds of people having nightlife on 30 Tir Street Tehran, eating, chatting, walking, listening to street music, and having Tehran street foods. Being interested in trying street food in Tehran, 30 Tir Street will be the best option.
Thanks to Tehran’s qualified transportation system, getting to 30 Tir Street is no hassle. It starts from Imam Khomeini Street and extends far into the garden of the Russian embassy. Taxis, the subway system, BRT, and online car rental systems are all at tourists’ disposal to help them get to 30 Tir Street Tehran conveniently. No need to say that the street is a popular destination for many Tehran tours because of the atmospheric Tehran nightlife it presents and the mouthwatering Tehran foods it offers.

The History of 30 Tir Street Tehran:

Followed by an insurrection, which took place on the 30th day of Tir (the 4th month of the Persian calendar) in 1331 (1959), the street’s name changed from Qavam Saltaneh to 30 Tir Street. It is also known as Religions Street because it hosts different holy places of various religions, such as Christianity and Zoroastrian. The 30 Tir Street shopkeepers try their best to keep the street mood identical to the 50s and 60s. Therefore, comparing to other Tehran neighborhoods, 30 Tir Street is an exception.

30 Tir Street hosts various cultures and religions; therefore, it is no wonder if you find several excellent places to visit. Not only its historically valued attractions, but 30 Tir Street food is also very famous among people. In the following, you will find more information about 30 Tir Street attractions.

The glassware and ceramic museum of Iran, also known as the Abgineh Museum, was the private residence of longtime Prime Minister Ahmed Qavam from 1921 until 1951. The complex was also the Embassy of Egypt for seven years.

With over 60 years since the opening of this museum, it is still the largest and the most stunning place for history and archaeology lovers in the country. It is an institution formed of two complexes;
1- The Museum of Ancient Iran
2- The Museum of Islamic Art and Archaeology opened in 1937 and 1972, respectively.

Located on 30 Tir street Tehran, the Haim Synagogue was built following the Iranian Constitutional Revolution in 1913, during the Qajar dynasty. Being constructed by an Iranian Jewish scholar, Soleiman Haim, the Haim synagogue is considered the first urban one in Iran. Before its constructions, most of the Iranian synagogues were built in ghettos (Jewish neighborhoods)

Combining Persian & European architecture makes the unique church of 30 Tir street look truly breathtaking and exemplary to any viewer. Saint Peters Church was established in 1876 by American missionaries on land granted by Nasser Al-Din Shah Qajar. It is now being used by Armenian Protestants and Korean expatriates in Iran.

How about another fascinating and informative museum? This time we are looking at the science and technology museum located not far away from the first one at 30 Tir Street. Not only satellites, robots, AIs, and many other types of modern technology, but some Iranian technological achievements of the past are found here.

The Tehran popular resort, the cobblestone pavement on 30 Tir Street, is the best place for hanging out and having Tehran street food, as well as visiting historical attractions, mostly related to the Qajar dynasty.

Tehran restaurants and cafés are the most popular night resorts for the people, specifically the youngsters. One of the most, if not the most important reason, why the nightlife of 30 Tir street is so vivid and alive is its street food stalls, which serve the very popular 30 Tir Street food. Although there are myriads of quality restaurants and cafes found around and inside the street, the place is nearly swarmed by street-food sellers. The smell of different beverages, foods, and desserts is spread all over 30 Tir Street. Therefore if you are interested in trying street food in Tehran, 30 Tir Street is the best place.

Iranian traditional foods are well known to the world’s people, and 30 Tir Street food sellers are well aware of it. Various Persian cuisines are offered to tourists, the smell and looks of which are so glamorous that they easily give in and start tasting different foods, including fast foods, snacks, Kebabs, Aash-Reshteh, Del-o-Jegar, etc. Being replete with Van Cafes, kiosks, and food stalls, 30 Tir Street is the popular center for Tehran street food, where people can have cheap and delicious meals, such as fast foods, Iranian snacks, and traditional foods. Ice creams, cakes, salads, and beverages are some examples of desserts that can be found on 30 Tir Street. The ubiquity of foods allows you to find different kinds of delicious stuff in and around there.

The mixture of past and present has resulted in a unique flavor for 30 Tir Street. Christians, Muslims, and Zoroastrians are gathered together in one place with beautiful peace that welcomes every individual warm-heartedly. People famous for hospitality and kindness are always there to make tourists feel like they are not even one fraction far away from home.