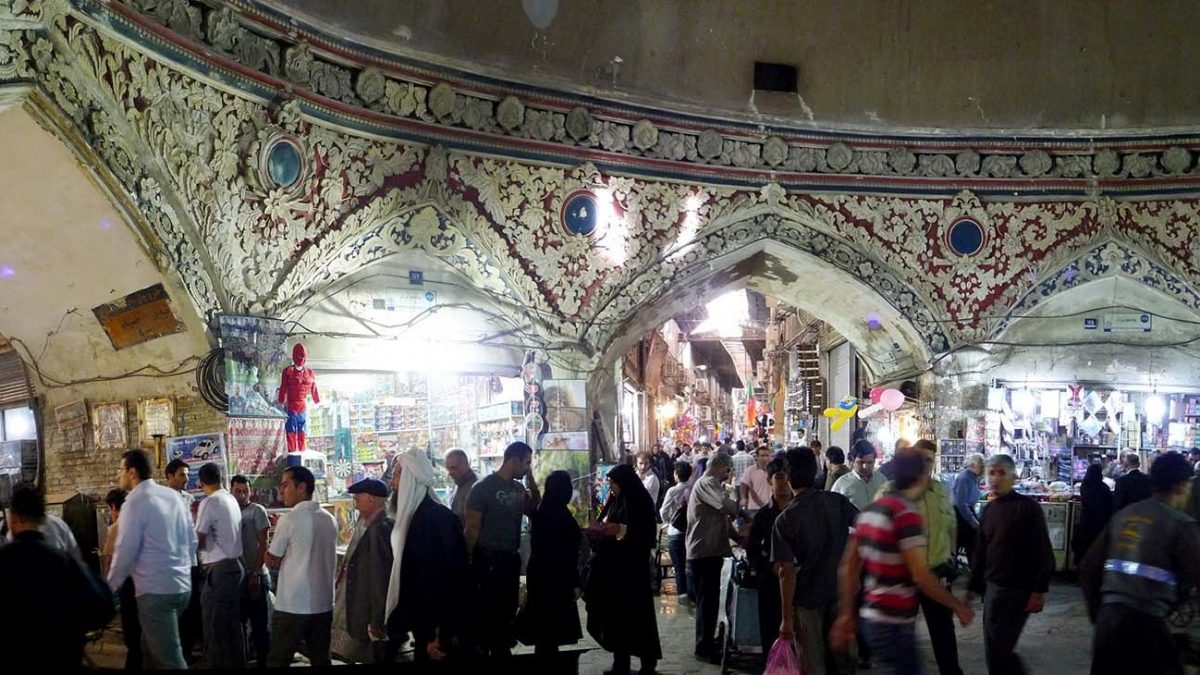 Not only economically, but also historically and architecturally Tehran Grand Bazaar, is a significant concentration of the city. Same as all Iran bazaars, Grand Bazaar of Tehran attracts many local and foreign tourists, by its picturesque ambiance arousing all human senses. Tehran bazar is one of the ‘must see’ Tehran attractions, favorable by almost all Tehran tours.

The History of Tehran Grand Bazaar:

Grand Bazaar in Tehran (also known as Bazar Tehran) is situated between Molavi Street, Sirous and Panzdah-e Khordad districts. Dating back to the Safavid era, the initial building was erected between 907 and 1135 A.H. by Shah Tahmasb I. Thereafter in the Qajar dynasty the intersections (chahar-sough bozorg, chahar-sough koochak) were added to the structure under the command of Agha Mohammad Khan. It was also stretched to the Arg Square and Jame’ Mosque of bazaar by Fath-Ali Shah Qajar.

The current plan of Tehran Grand Bazaar was constructed by Nasser-al-Din Shah Qajar in the 19th century, the golden age of Grand Bazaar in Tehran. The main entrance of Tehran Bazaar (known as Sabzeh Meydan) was also built under the command of Nasser-al-Din Shah, who employed a French architect for roofing the whole bazaar as well. In the Pahlavi era, some other paths and corridors were added to the structure, which all have developed Grand Bazaar of Tehran into an area of one square kilometer.

The Museum of Tehran Architecture:

Being a systematic construction, Tehran Grand Bazaar offers different interrelated sections. Several bazaars (with different entrances), are connected to each other through corridors and conjunctions. They create a complicated architectural structure with a traditional generality and modern particularities. Each bazaar consists of a main line (with the length of 10 kilometers), called Raasteh, which hosts shops (dokkans) on both sides. The main lines of Tehran Grand Bazaar are Bazaar-e Bozorg, Bazaar-e Amir, Bazaar-e Zeid, Hammam Chaal, Hazrati, Norouz Khan, Manouchehr Khani, Farrash Bashi, and Raasteh Kababi-ha.

Being a place of commerce, Tehran Grand Bazaar hosts thousands of customers and visitors daily, who enjoy shopping, wandering the labyrinthine lanes and watching the beautiful Persian carpets along with having Bazar Tehran Foods.

Saraa is another part of a bazaar, which is a roofed courtyard, with interrelated chambers around. Timcheh is the other roofed section, designed for selling specialized goods with amazing architectural adornments. The intersections between two main lines are also called Chahar-sough, which shows a different architecture with eye-catching interior ornaments.
The whole structure is a brick-made arched labyrinthine building, decorated with plaster moulding, decorative brickwork,k and colorful windows. The winding paths, domes and arches and the traditional air conditioning system, are all manifesting Old Persian architectural style.

Tehran bazar was largely opened and partially covered first. When the roof was attached to the structure, some teahouses, bathhouses, mosques, traditional gymnasiums and drinking fountains were added as well. The arched and domical roof of Bazar Tehran offers many apertures for letting sunlight in.

And Finally a Shopping Center:

You can literally find everything in Bazare Tehran, except for fresh foods. Each line is dedicated to specific goods. You may find clothes in Raasteh Jafari, Gold and Jewelry in Raaste Zargar-ha, home appliances in Timche Hajeb-al Dowleh, bagsin Moshir Khalvat, and shoes in Raasteh Kaffash-ha, nuts, dried fruits and spices in Chahar-sough.

There are lots of wholesalers, retailers, warehouses and workshops in Grand Bazaar of Tehran, which all have made it the economic center of the city. Although a large portion of trading is done in the northern Tehran currently, the Grand Bazaar has not lost its significance at all. Being a place of commerce, Tehran Grand Bazaar hosts thousands of customers and visitors daily, who enjoy shopping, wandering the labyrinthine lanes and watching the beautiful Persian carpets along with having Bazar Tehran Foods.

From the Crowded Restaurants to the World’s Smallest Teahouse:

Tehran Grand Bazaar is a popular place for various street foods, where the customers and shopkeepers (bazariz) can enjoy fast and delicious foods at the stalls in Grand Bazaar Tehran opening hours. Several old and well-reputed restaurants are also serving Iranian traditional foods as well.

Moslem, Sharaf-ol Eslami, Khayyam, and Shamshiri are among the best Grand Bazaar Tehran restaurants. Serving about 5000 visitors daily, Moslem is considered as the most famous Grand Bazaar Tehran restaurant. There is a long line outside, all waiting for having Moslem’s popular Tahchin! But the line goes really fast due to its quick serving.
Haj Ali Darvish Teahouse (since 1918), the world’s smallest teahouse is located in Tehran Bazar, Gold and Jewelry line, next to Abdollah Khan Mosque. Being registered as a national heritage, the teahouse is truly attracting the visitors.

Arq Square, adjacent to Bazar Tehran, is an exquisite rectangular square, beautified with flowers and statures, where you can try old automobiles dating back to hundred years ago. Imam Mosque and Golestan Palace are also located near Grand Bazaar of Tehran, where you can have an amazing visit. The astonishing architecture of Iranian constructions will definitely amaze you! Just make sure to follow a good Tehran travel guide, not to miss any of Tehran attractions.

How to get to Grand Bazaar in Tehran:

Unlike Tajrish Bazaar, which is open until late at night, Tehran Grand Bazaar opening hours are more limited. Bazare Tehran is normally open Saturday to Wednesday from 9:00 to 18:00, while this time is bounded to the noon on Thursdays. Tehran Grand Bazaar is closed on Fridays and holidays.