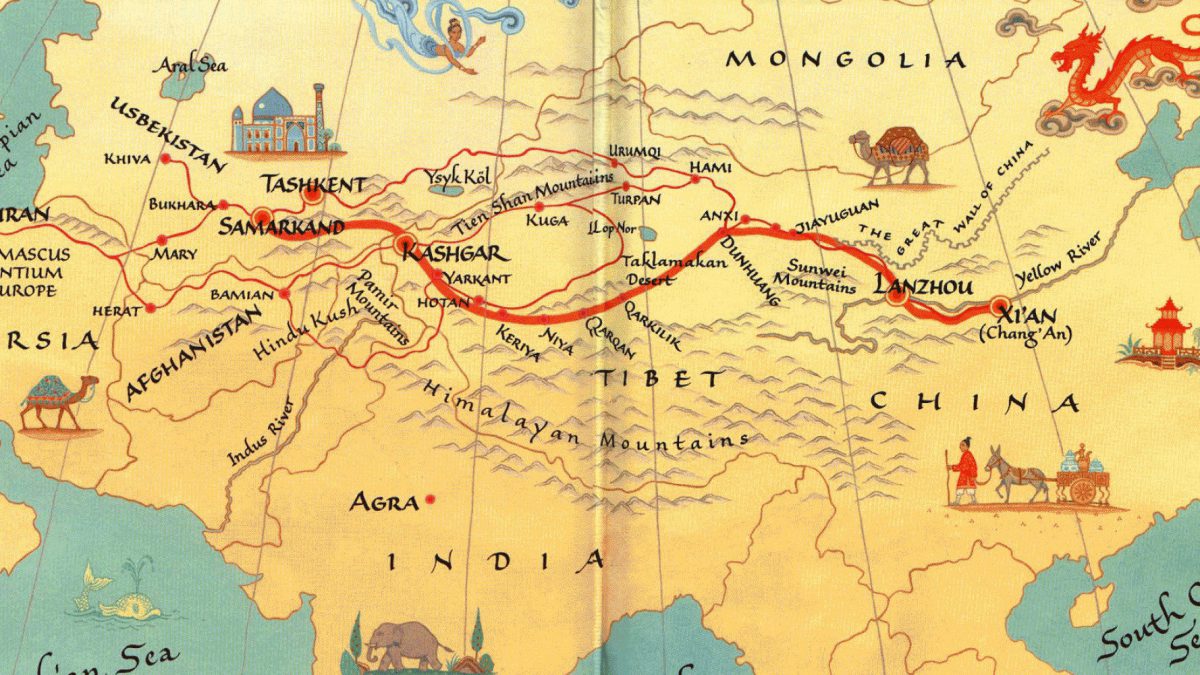 Silk Road, the Ancient communication route in the World

The most ancient route in the world is known as the Silk Road which enables trades and communications through the West in European countries to the East in China. It facilitates the trades between Asian and European countries until the 15th century AD. For almost 17 centuries the Silk Road was the biggest world trade network. If you are interested to know more about this ancient road, here we are going to briefly introduce this amazing and most influential trade road in history.
What you will read in this article:

– Introduction of the silk road

– The history of the silk road

– Different Routes of the Silk Road

– Most Popular Trade Items in the Silk Road

– Caravanserais and Historical Inns on the Silk Road

Introduction of the Silk Road

As it is obvious from its name, the name of the Silk Road derives from the most popular trade item over it; the Silk. However, it was in 1877 when the name was used by German geographer and historian Ferdinand von Richthofen for the first time.
The Silk Road influences on the development of many countries through the history such as China, Korea, Japan, the Indian subcontinent, the Horn of Africa, Saudi Arabia, Iran/Persia, and European countries is undeniable. In addition, to be the center of trade, it was used as the cultural interaction between all these countries.
What is more interesting about Silk Road is that it was not actually one single road and it was actually a wide network. That is why historians prefer to use the term “Silk Routes”.

The History of the Silk Road

According to the historical evidence, the Silk Road was officially established by Han Dynasty, rulers of China from 206 B.C. to 220 A.D. However, there is evidence that confirms transportation of goods and services along these routes started even further.
Another ancient road which was built by the order of Persian ruler Darius I, the king of the Achaemenid Empire was the Royal Road. It connected Susa (in present-day Iran) to Sardis (near the Mediterranean Sea in modern Turkey) with more than 1,600 miles. It is believed that the road officially opened 300 years before the official opening of the Silk Road, and it connected different points on the Silk Road.
Later, the expansion of the Royal Road connected Mesopotamia to the Indian subcontinent and also northern Africa via Egypt and Greece. Alexander the Great, expanded his dominion into Persia via the Royal Road.
When Roman lost their territories in Asia, and Arabs gained power in the Levant, the Silk Road gradually became unsafe and the number of travelers on the routes decreased. In the 13th and 14th centuries, the Venetian Marco Polo traveled to China using the road.

In the past few centuries, a new group of travelers such as archaeologists, geographers, and enthusiastic explorers step on the Silk Road. French, English, German, Russian, and Japanese researchers explored ancient sites along the Silk Road, leading to many archaeological discoveries, numerous academic studies, and most of all, a renewed interest in the history of these routes.
Today, the only part of the Silk Road exists is in the form of a paved highway connecting Pakistan and the Uygur Autonomous Region of Xinjiang, China.

Different Routes of the Silk Road

Historical maps show that there were two main routes that are known as the Silk Road. These roads were the terrestrial and the maritime routes that is why using the terms of “Silk Routes” seems more accurate.
The main route across Iran/ Persia started in Herat (now in Afghanistan) led northward to Marv and further to Samarkand. It was merged with another road from China across the oases of Eastern Turkestan. The area of Asia Minor and Syria was connected by the overland road leading along the Euphrates to the harbors of the Persian Gulf.

Most Popular Trade Items in the Silk Road

The most important trade item in the Silk Road was Chinese silk. However, there was so many other materials of trades between the East and the West.
From West to East traded goods included:
• Horses
• Saddles and Riding Tack
• The grapevine and grapes
• Dogs and other animals
• Animal furs and skins
• Honey
• Fruits
• Glassware
• Woolen blankets, rugs, carpets
• Textiles (such as curtains)
• Gold and Silver
• Camels
• Slaves
• Weapons and armor
From East to West traded goods included:
• Silk
• Tea
• Dyes
• Precious Stones
• China (plates, bowls, cups, vases)
• Porcelain
• Spices (such as cinnamon and ginger)
• Bronze and gold artifacts
• Medicine
• Perfumes
• Ivory
• Rice
• Paper
• Gunpowder

Caravanserais and Historical Inns on the Silk Road

The term “caravanserai” refers to roadside inns which were built to shelter men, goods, and animals along the Silk Road. The word is a combination of the caravan (means a group of travelers) and sara (means home or place to stay).
Caravanserais were ideally built-in every 30 to 40 kilometers in well-maintained areas. The main purpose of building them was preventing travelers and merchants from being exposed to the dangers of the road.
It is believed that the Achaemenid Empire (circa 550-330 BC) built the first caravanserais on the road. With the development of the road systems and the increase in the number of travelers and merchants, the number of these old roadside inns increased. Shah Abbas I (1571-1629), the king of Safavid Dynasty built a network of thousand caravanserais across Iran during his governor.
Still, some of these caravanserais exist in Iran, and if you have the interest to visit them during your travel to Iran, here is the list of the most preserved Caravanserais in the country.
• Abbas Abad (Shahrood)
• Dayr-e Gachin (National Kavir Park)
• Dodehak (Delijan, Markazi)
• Hoz-e Sultan (Qom)
• Maranjab (Aran o Bidgol)
• Miandasht (Shahrood)
• Moshir-ol-molk (Bushehr)
• Khargoshi (Yazd)
• Pasangan (Qom)
• Qasr-e Bahram (Tehran)
• Robat Karim (Tehran – Saveh Road)
• Robat Sharaf (Mashhad)
• Sa’ad-al Saltaneh (Qazvin)
• Zein-o-din (Mehriz)

China and Iran Relationship in Historical and Modern eras