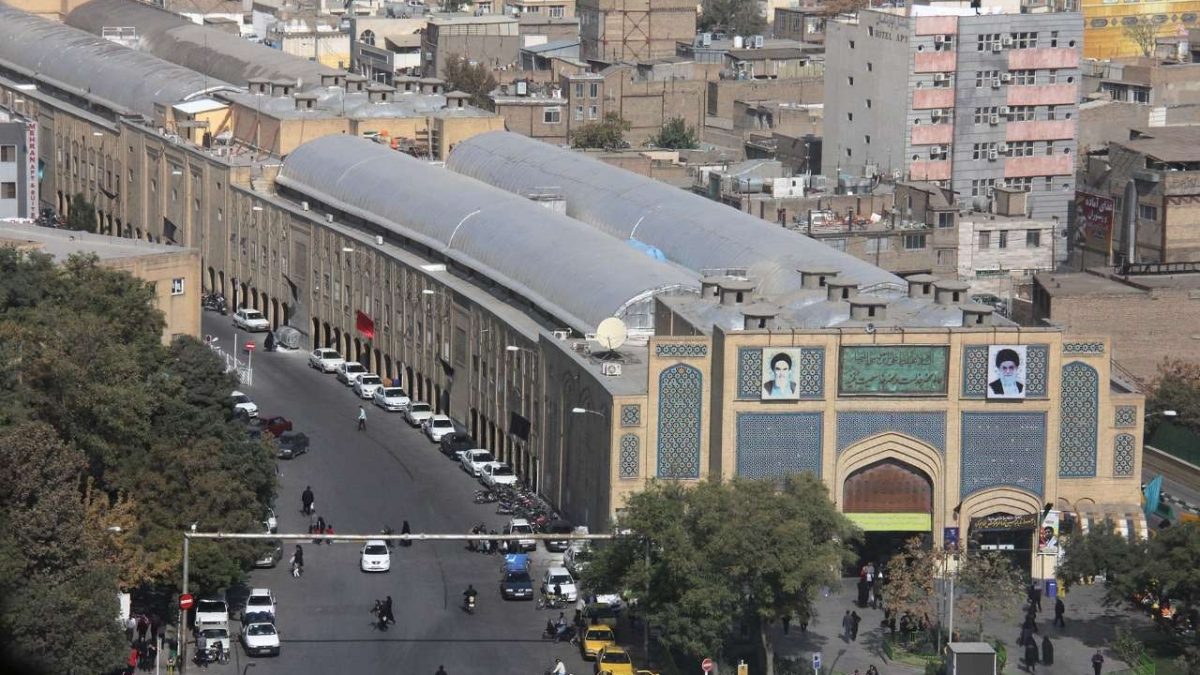 Mashhad bazaar is an old bazaar in Mashhad city, located on the eastern side of Razavi Holy Shrine, near some best hospitable Mashhad hotels. Mashhad Bazaar Reza is an extremely popular shopping mall among tourists and pilgrims who mainly travel for visiting Mashhad attractions.
Structured traditionally similar to all original and historical Iranian markets, Mashhad bazaar with its great linear extent, considered a tourist attraction as well. Being constructed in the present time, Mashhad Bazaar Reza is well-known as an old bazaar in the city. Modeling from the traditional and ancient Iranian markets, Bazaar Reza in Mashhad is not really an old one, comparing to other traditional Iran bazaars.

The general construction of Mashhad bazaar was approved by the parliament of the Pahlavi dynasty. The act of constructing was entrusted to Khorasan governor of the time, who was the viceroy of Astan Quds Razavi as well. He commanded the destruction of the old bazaar and all the buildings and shops scattered around the shrine of Emam Reza on Sheikh Tusi Street at first. Consequently, an area of around one-kilometer length and 33 meters width was provided for constructing the new bazaar.
The construction and design of Bazar Reza in Mashhad were entrusted to the famous architect of the time, Dariush Borbour. Being inspired by traditional Iranian bazaars, and in contrast to the more modern bazaars such as Mashhad Bazaar Ferdowsi, Barbour have designed Bazaar-e Reza a two story covered bazaar.

The Architecture of Bazaar Reza in Mashhad

Bazaar Reza’s facade is designed according to Iranian Islamic architecture. The facades on both sides are exactly the same and are designed by two analogous arches. The entrance of Mashhad bazaar from Shahrivar Square is more visible due to the opposite playground, but the one from Falake Aab square, is not very noticeable, but still in the same shape. In addition to the main entrance, Mashhad bazaar contains 12 sub-entrances as well.
Mashhad Bazaar Reza displays a complex and attractive structure. At first glance, Bazaar Reza looks like an integrated market, but it is made up of six separated bazaars, connected to each other through several corridors indeed. In each corridor, benches and rest areas are provided for the tourists to relax. The entrance stairs to the second floor are also located within these corridors. The general design of whole bazaar is structured in the form of two parallel corridors as well.

Bazaar Reza in Mashhad is well-known for having all Mashhad souvenirs to sell. Being an antique market, many old merchants of the city are still working in the bazaar; therefore, Bazaar Reza is still the best option for purchasing unique items such as decorative stones, exclusive Mashhad perfumes and even barberry and saffron. Mashhad tours normally take the visitors to this specific bazaar and Mashhad Bazaar Ferdowsi as well to provide them with these favorable Mashhad souvenirs.
The shops located at the entrance of the bazaar are mostly perfume and jewelry shops. Mashhad perfumes are truly different from other scents you have ever smelled. Many of these perfumes are famous for their natural odor. Mohammadi flower perfume, Jasmine flower perfume, etc. are among the most popular ones.
You may also find many colorful shops covered with rosaries and seals, which are among other Mashhad souvenirs. Another interesting feature of Bazaar Reza is the different function of the second floor, where you may see many manufacturing workshops. Ornamental stone carving, goldsmithing, and embroidery are among the main professions in this category.
You can definitely visit the workshops to buy turquoise and agate, the most precious souvenirs of Mashhad. Of course, buying turquoise is more recommended as a souvenir, since Iran’s greatest and major turquoise mine is located in Neishabour, Khorasan.
The combination of various oriental spices, especially saffron and the scent of perfumes such as Mohammadi flower, along with the eye-catching images of colorful rosaries and various ornaments, have made Bazaar Reza in Mashhad an attractive and spectacular place. The religious products such as seals and prayer rugs have created a special religious feeling in Mashhad bazaar as well, which makes the experience quite different from the other purchasing experiences. So, do not hesitate packing your suitcases and plan your Mashhad travel to enjoy them all.