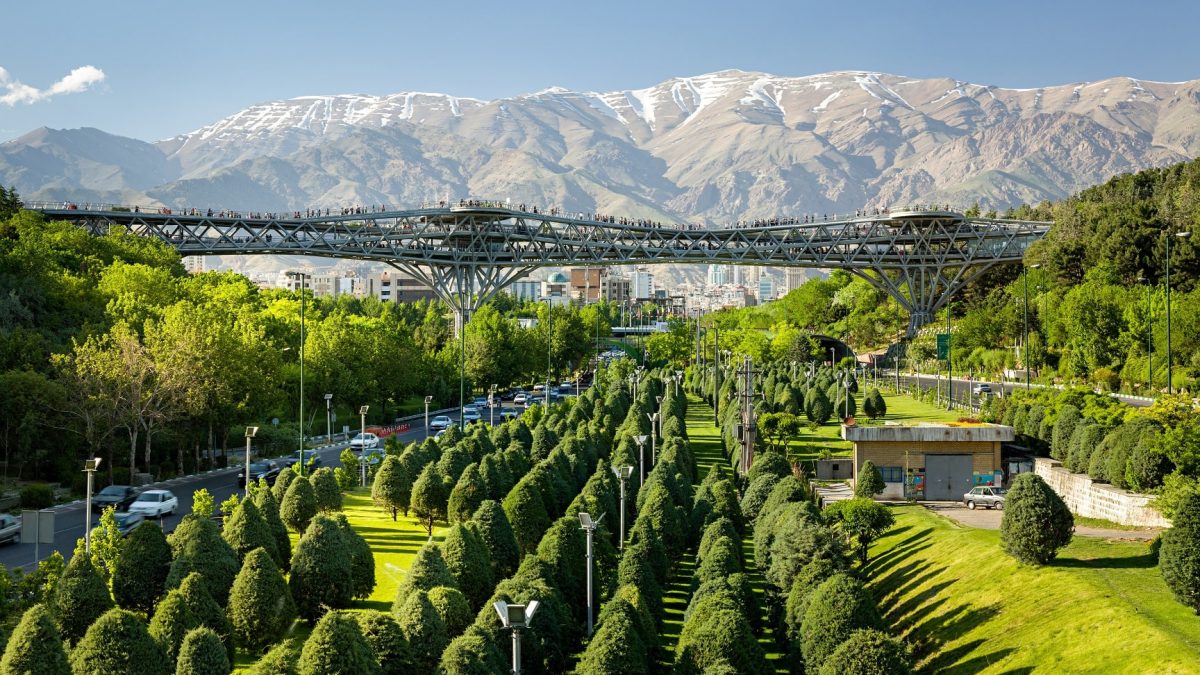 Next to the iconic Milad Tower, Azadi Tower, Tabiat Bridge in Tehran is considered the second modern symbol of the capital. Located in Abbas Abad region (Haghani Highway), Tehran Tabiat Bridge (also known as Pole Tabiat Tehran, and Tehran Nature Bridge) is connection two popular parks (Taleghani Forest Park and Ab- o- Atash Park) together, therefore it is a top choice bridge for people to hang out specifically in the evenings.

The Construction of Tehran Tabiat Bridge: The Young Generations’ Artifice

As a multilevel, pedestrian bridge, Tehran Nature Bridge was designed by Leila Araghian and Alireza Behzadi, two young Iranian architects of Diba Tensile Architecture, as part of a domestic competition for the design of a bridge connecting the two mentioned parks. The construction started in 2010 by using 2000 tons of steel and 10000 cubic meters of concrete. Having three levels, Tehran Tabiat Bridge covers an area of 7000 square meters totally.

This 270 meter structure, built on a height of 40 meters above ground level, is the largest pedestrian bridge in the Middle East. The modern anatomy of Tabiat Bridge Tehran Iran associates three huge trees erected by metal columns, and the interwoven branches, which harmonize with the name of the bridge, Tabiat (means nature in Persian). Reviewing Tabiat Bridge, Archdaily has fully covered the architectural features of the structure. It is worth mentioning that Diba Tensile Architecture has won several significant International prizes for designing Tabiat pedestrian bridge in Tehran, including Popular Choice Prize for Highways and Bridges from the Architizer A+ Awards and Aga Khan Award for Architecture. The bridge was visited by four million Iranians as it opened in October 2014.

The modern anatomy of Tabiat Bridge Tehran Iran associates three huge trees erected by metal columns, and the interwoven branches, which harmonize with the name of the bridge, Tabiat (means nature in Persian).

Inspired by Isfahan Si-o-se Pol (Pole Khaju), Araghian wanted Tehran Nature Bridge to “be a place for people to stay and ponder, not simply pass.” For doing so, the bridge is equipped with several benches and seats in addition to restaurants, cafes and green spaces for encouraging visitors to linger.

The Design of Nature Bridge in Tehran:

The lowest level with the area of about 1450 square meter has been covered by the second level and glass walls, proper for the cold and rainy seasons, while the third level with two round platforms on the path, invites visitors to take amazing photos. Spanning Tehran Modarres Highway, Tabiat Bridge is overlooking the north Tehran skyline against the Alborz Mountains.

Crossing over Tehran Modarres highway, Tabiat Bridge is connecting two nearby parks (Ab-o Atash Park and Taleghani Forest Park). Therefore the bridge is offering amazing scenery to the visitors who feel like walking through a forest. The feeling is even intensified by the soft wooden flooring of the structure as well, which creates a warm, natural effect to the fullest. Being designed simply for staying rather than passing, Tabiat Bridge in Tehran with its curved shape adds to the plurality of perspectives. That is the reason Pole Tabiat Tehran is a huge hit with locals, where they can ponder and take wonderful photos.

Surrounded by numerous trees of the nearby parks, Tehran Tabiat Bridge provides a superb view in addition to breaths of fresh air. The beautiful landscape, various eateries, and seating areas in between have all made Tabiat Bridge 2020 top Tehran attraction. The food court of Tabiat Bridge in Tehran serves almost all types of fast foods and some Iranian foods such as Kebab. Melal with its outdoor seating area, is also the most popular Tabiat Bridge restaurant, which hosts the visitors with breakfast, brunch, International cuisines, and beverages. Another popular Tabiat Bridge Restaurant is Tabiat VIP Café Restaurant located in Taleghani Forest Park, which is a very nice place to eat as well.

There are some other Tehran attractions near Tabiat Bridge, making the whole area a wonderful place for gathering. Ab-o Atash Park with its modern, stunning design along with The Wooden Way Food Court is in a few steps. Gonbad-e Mina planetarium is also located in the same park. Taleghani Forest Park at the opposite end of Tehran Nature Bridge is an amazing park for walking and lingering, especially in winter when the trees are covered by snow.

Tehran Tabiat Bridge is open to visitors every day from 6:00 a.m. to 00:30. The entrance is free of charges. Note of warning: If you want to visit Nature Bridge Tehran, Iran, do not miss visiting it at sunsets when you will have an amazing view of northern Tehran. The dreamlike, colorful lightening of the bridge, which adds to its effect, will leave an unforgettable memory in your mind as well. So do not miss visiting Tabiat Bridge Tehran Iran!