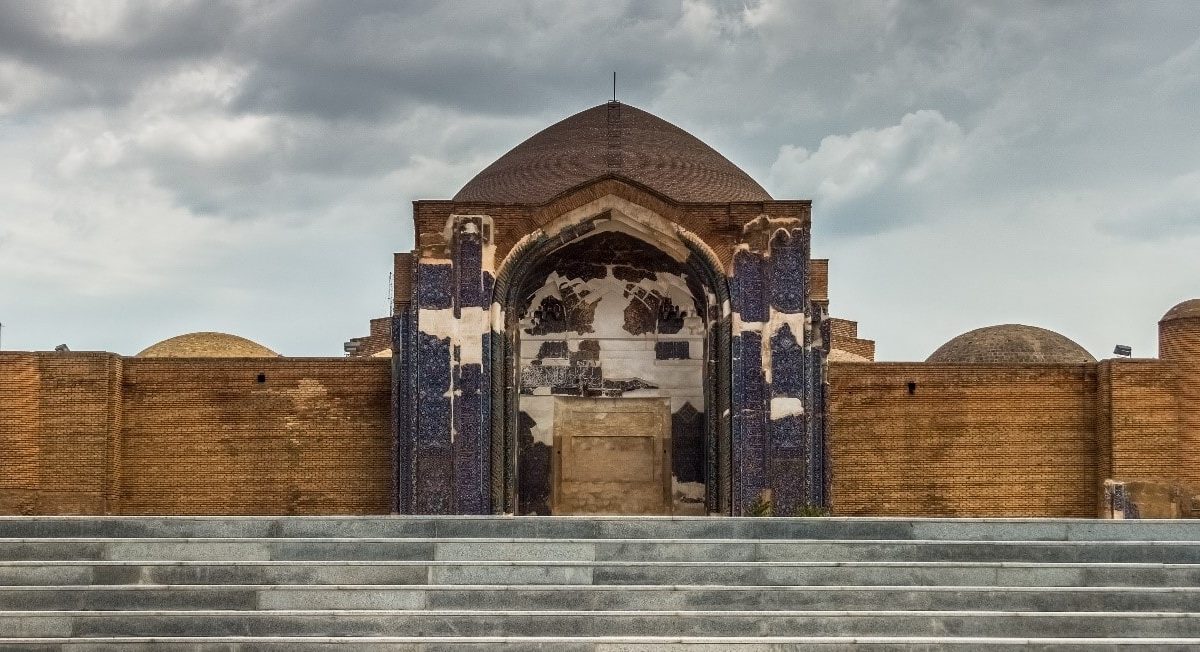 According to the entrance inscription of the Blue Mosque in Tabriz, its construction dates back to 1465. Seemingly this date indicates the time of its tile work completion, however certainly, the procedure of its construction had begun a few years earlier. According to the mentioned inscription, this construction was also built during the reign of King Qaraquyunlu.
Being damaged by several earthquakes, specifically the strongest one in 1780, the beautiful domes of Tabriz Blue Mosque were gradually collapsed between the 16th and 18th centuries. During the Pahlavi era in the 20th century, the Blue Mosque of Tabriz Iran was reconstructed finally. Mohammad Reza Memaran (one of Tabriz’s traditional architects) performed this renovation under the Iranian Organization of Cultural Heritages’ authority.
Although there is nothing left from this construction today (with the exception of the entrance and a few foundations), few of remnants could be taken as evidences of the glory and beauty of Masjed Kabud in the old ages.

Masjed Kabud is one of the most popular tourist attractions in Tabriz city as well. Visiting the Blue Mosque in Tabriz is an essential plan for the travelers of Tabriz tours.
Blue Mosque of Tabriz Iran is one of the commemorations of Abu al-Muzaffar Jahanshah ibn Qarayusuf, the greatest ruler of the Qaraqoyunlu Turkoman dynasty. The mosque was literally constructed by the efforts and supervision of the king’s wife, and his daughter in 1465r. Being marked as a true masterpiece of Islamic architecture, Tabriz Blue Mosque is located on Imam Khomeini Street, across Sadr Alley, next to Khaghani Park in Tabriz. Several excellent Tabriz hotels are available near this enchanting mosque as well. You will definitely visit Tabriz Blue Mosque in Tabriz tours during you Iran travel.

As mentioned above, Tabriz Blue Mosque is one of the unique examples of antique Iranian architectural masterpieces. It is the only survived construction from the Qaraquyunlus in their capital, Tabriz. The architectural attractions of the mosque are still enchanting even after centuries of exhaustion and despite of its damaged structure, everyone would be still amazed by its beauties.
The most prominent feature of the Blue Mosque in Tabriz and its boundless fame is definitely its special and amazing architecture and mosaic tiling, specifically the great artistic combination of bricks and tiles, and also its miraculous designs which adorn both interior and exterior surfaces of the construction.

The mosque was not just a single mosque at first, but a part of Mozaffariyeh complex, accompanied by a courtyard, a monastery, and a library. It is worth mentioning that all other sections (except the mosque itself) are destroyed today. Most parts of the Blue Mosque of Tabriz are made of bricks, and some rare stones in a few parts. Looking at the remains of the mosque, one can see all the bricks are plastered.
Masjed Kabud includes a square shape courtyard, a large pool for ablution, and beautiful aprons on both sides. The major building which has a square shape design is erected right in front of the courtyard and had been covered by a brick dome in the past.

How to Get to Blue Mosque in Tabriz