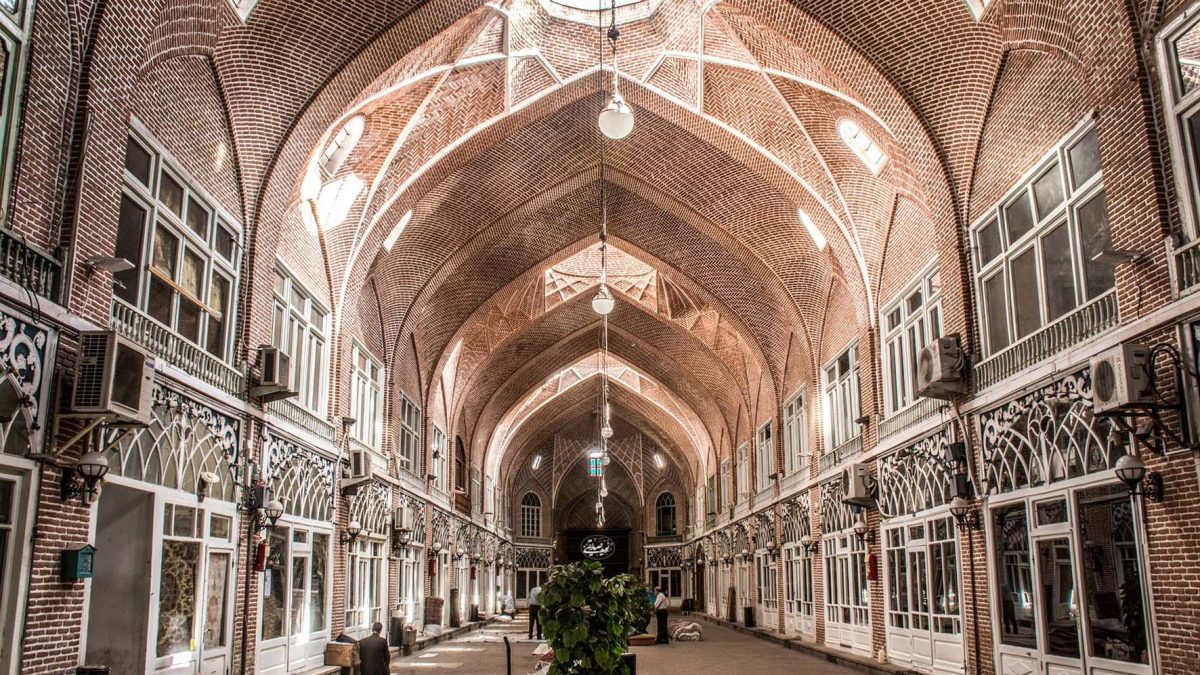 Tabriz historical bazaar, with an area of about one square kilometer, is the largest traditional indoor market in the world. Bazaar of Tabriz was registered as the first world bazaar in the UNESCO World Heritage List in August 2010. The unique market architecture style, shop designs, number of passages, caravanserais, corridors, as well as varied types of professions, having a large number of historical schools and mosques within, have all made Tabriz historical bazaar, an excellent instance of oriental trade and commercial life style.
It is worth mentioning that by virtue of the position of Tabriz city on the Silk Road and the daily passage of thousands of caravans from different Asian, African, and European countries in the past, Tabriz bazaar had achieved a great reputation and prosperity.

Tabriz Bazaar was constructed more than a thousand years ago when there were no settlements like those of todays. Tabriz historic bazaar was one of the hubs of trade at that time and a remarkable amount of merchandise was passing through this route. Being a covered market, it has not only been a commercial center, but also an evident example of a small oriental and Islamic society where everyday life was flowing.
Lots of domestic and foreign tourists, who visit Iran, plan their travel with Tabriz tours included, to visit its sights specifically Tabriz old bazaar. As mentioned before, Tabriz grand bazaar is one of the largest indoor markets in the world, and its architecture is truly a masterpiece of Iranian architecture as well. Well-known tourists, such as Marco Polo and Jackson, have visited Tabriz bazaar and praised its glory.

Tabriz city has been always the center of cultural and commercial exchange. Being in the heart of the city, Tabriz grand bazaar has been always the pivot of trade and commerce since the early stages of Islam as well. Tabriz bazaar Iran was razed due to an earthquake in 1780; however it was reconstructed by master architects. The current Tabriz bazaar history dates back to the late Zandi, and Qajar eras and it is architecturally one of the largest roofed complexes in the world.
Bazaar of Tabriz is constructed stunningly, and the harmonized design of its sections is truly unrivalled. Words cannot describe how beautifully the chambers and shops have been put together in Tabriz old bazaar. The length and width of the structure are designed properly, suitable for Tabriz’s weather. To put it simply, the roofs are made shorter because of the cold weather.

About Tabriz bazaar map, it is worth mentioning that the central core of Tabriz is located inside a quadrilateral and Tabriz’s old bazaar placed in the center of this quadrilateral. This bazaar is limited to the Grand Mosque from the west and to Ali Qapu from the east (a complex of Crown Prince Palaces).
Tabriz bazaar plan consists of two covered rows, North-South and East-West. Subsidiary rows connect the central rows, and in the spaces between, the main components of the bazaar are built, such as Timcheh (passages) and Sarai (corridors). The most significant entrance to the bazaar of Tabriz is currently at the northern end of Ferdowsi Street.

Like all Persian Bazaars Tabriz old bazaar has a large number of chambers called “Hojreh” and it features about 6500 Hojrehs in it. You can find 35 caravansaries known as “Sarai” in Tabriz historical bazaar complex as well. They were used as accommodations for guest merchants who brought salable goods in the past.
Tabriz grand bazaar contains 25 enclosed sections called Timcheh, used as a room for selling goods. Mozaffariyeh Timcheh, Amir Timcheh, Haji Mohammad Gholi Timcheh, and Ghand Forooshan Timcheh are among the most famous ones.

Amir Timcheh is one of the most famous and prosperous ones in Tabriz old bazaar. Being as old as the Qajar dynasty, jewelry gold is exchanged in this Timcheh. Being extremely spectacular and eye-catching, the largest brick dome in the bazaar is located here.
Mozaffariyeh Timcheh is Tabriz carpet bazaar where hand-woven rugs which play a key role in Tabriz mercantile are sold. The carpets with their elegant colors give a truly glorious sparkle to the bazaar.

How get to Tabriz Historical Bazaar?

Being at the heart of the city, Tabriz old bazaar is really accessible and even close to several Tabriz hotels. If you choose the subway, Shahid Mohaqqeqi and Sa’at Square are the closest stations to Tabriz Bazaar. You can also use the BRT bus system which will be best if you get off the bus at the bazaar station. Do not forget to visit this beautiful bazaar in your travel to Tabriz!