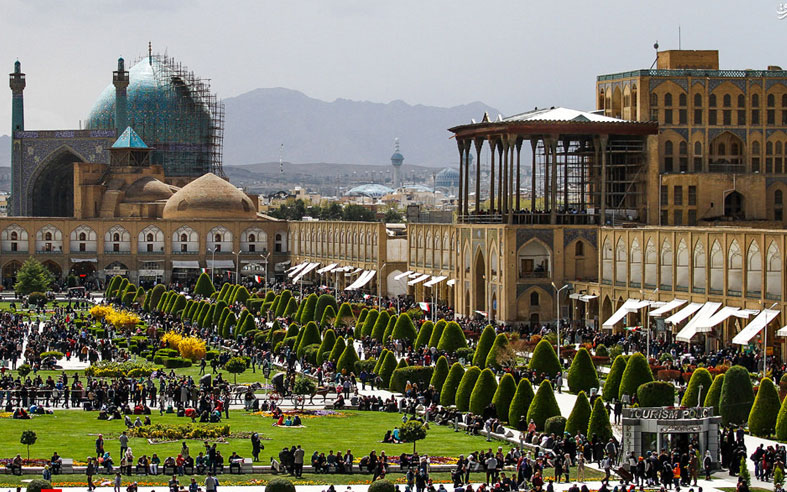 Paying a visit to Isfahan in Iran, probably you will see all of the main streets in the city leading to the Naqsh-e Jahan Square. The square located at the heart of historical Isfahan City is undoubtedly one of the most famous tourist attractions in all over Iran; because, a collection of historical sites and tourist attractions reflects Iranian history, culture and art. Here, we will take a look at this beautiful building collection.

In fact, several monuments are located at central part of one of the most beautiful cities in Iran i.e. Isfahan. The historical site is dated back to more than 500 years ago and is one of the registered national heritages of Iran. At four sides of the square, there are different historical buildings such as historical Isfahan Bazaar, Shah Mosque, Alighapoo Palace, and Sheikh Lotfollah Mosque creating beautiful manifestation within inner space of the square. Historical buildings in the complex are constructed by skillful architectures such as Ali Akbar Isfahani and his son Mohammad Reza Isfahani showing their arts through combination of Iranian architecture and Islamic components, in this complex.

Naqsh-e Jahan Square at safavid’s era when Isfahan has been capital city of Iran has been one of the big gardens in the city, construction of which has been ordered by seventh king of Safavids so that it would be used for military parade, on religious and mourning occasions, festivals and such entertainments as game of polo (chogan). According to the historians, construction of such unique complex has been ordered by Shah Abbas to the aim of showing off glory and grandeur of his kingdom and Iranians to neighbor countries.
After overthrown of Safavids and especially during Qajar era, the square lost its prosperity; however, during Pahlavi era it was renovated and a new spirit has been injected to this valuable historical monument so that it has been turned again to a center for political and religious gatherings, at central part of Iran. Still, some of important events in Isfahan are held at this place.

This monument is second biggest historical site in the world and one of those listed in UNESCO World Heritage. One of the very good characteristics of this tourist attraction is providing quick access to Historical Isfahan Bazaar located adjacent it. From Bazaar various types of handicrafts from Isfahan can be bought. From architectural perspective also, it is one of outstanding building enjoyed by people interested in architectural arts in terms of Islamic arts used in it. In addition to architecture, calligraphies on the walls of Shah and Sheikh Lotfollah Mosques as well as painted tile works in the building can be very attractive. In inner space of the square, you can ride caroche as an entertainment so that you can experience good feelings of travelling through history.

Places to see near Naqsh-e Jahan Square in Isfahan

There are many historical buildings around this beautiful square; however, four of them are famous and very popular among Iranian and foreign tourists.

The mosque has been constructed in Naqsh-e Jahan Square in Isfahan so that Shah Abbas pays tribute to Sheikh Lotfollah Missi. Currently its beautiful dome is shining like a jewel at top of the building. Using Islamic patterns; and, verses of Quran designed on the walls of the mosque have turned the mosque to one of the most beautiful Mosque in Iran.

The palace has been one of administrative buildings at Safavids Era, inclusion of which in the complex has been ordered by Shah Abbas. Foreign guests such as kings and governors of different regions have been lodging in this palace. Plaster works and very beautiful miniatures used in architecture of the palace are amazing.

Shah Mosque is the most important mosque in Isfahan, used as a place for prayer and lectures of Safavid Kings. The mosque has become renovated and completed during different periods and many architects have had contribution in construction of the complex. The mosque is one of the biggest mosques in Iran and its tile works and woodcrafts are unique among their peer groups. This historical place has been of such importance for kings that controlling it has been resembling controlling Naqsh-e Jahan Square and the whole Isfahan.

Historical entrance building to the Isfahan Bazaar is called Kayseri Façade. This large gate can be reached from outside Naqsh-e Jahan Square, as well; and through which you will enter historical Isfahan Bazaar. Previously in this bazaar, the most expensive commodities have been sold and it is still working. Nowadays, in the bazaar, various kinds of handicrafts from Isfahan such as enamels, woodcarvings, inlaid works, statutes, earthenware, Iranian carpets, etched works, miniatures, and turquoise works can be found; and, it is one of the largest tourism complexes providing handicrafts for sales, within Iran.

If interested in travelling to Iran, Isfahan is one of the best destinations. If willing to travel to Isfahan, please do not forget Naqsh-e Jahan Square as one of the biggest and most beautiful squares in the world. Undoubtedly, this will complete your experience of travel to Iran and makes it a memorable travel for you.