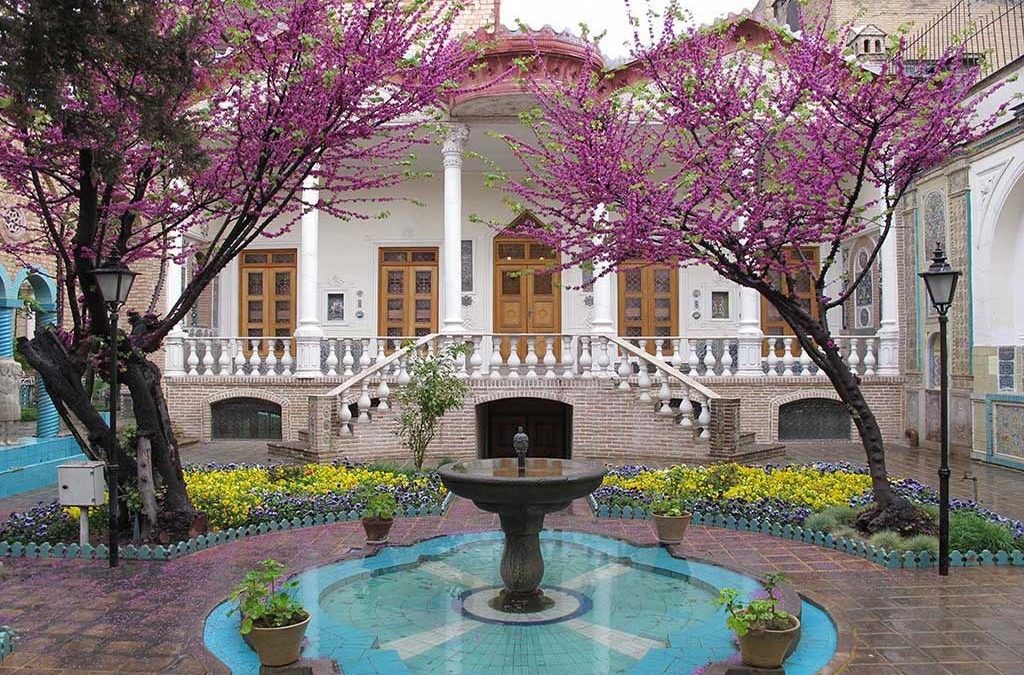 Moghadam Museum in Tehran is one of the monuments left by the Qajar era and belonged to one of the courtiers of that time, Mohammad Taghi Khan-e Ehtesab Al-Molk. This museum is so valuable in terms of history, beautiful architecture and precious rare objects it holds. Consequently, many writers and visitors have considered it as the most beautiful and most precious historical house in Tehran. The house of Moghadam is a symbol of noble Iranian architecture meanwhile, with the principles of space gardening.

Ehtesab Al-Molk had two sons, Hassan and Mohsen, who went to Europe to study. Hassan got involved in literary, political and social activities. He died at a very young age however, he had written a famous play “Jafar Khan from Farang”. His younger brother, Mohsen, returned to Iran after graduating in painting, art history and archeology. He settled in his father’s house with his wife “Solma”. Solma Kuyumjian was born in Bulgaria and she was the head of the National Museum of Iran. She and her husband have collected numerous historical objects and works along with their scientific activities. Mohsen Moghadam has collected many valuable crafts such as magnificent tiles, carved stone pieces, etc. In other words, he has decorated his house with these objects for it to look like a traditional historical mansion. He was trying to gather historical cloth, pottery, glass, paintings, coins, and old documents in proper order.

Golestan Palace; a masterpiece at the heart of Tehran
Saadabad Palace, a Must See Complex in Tehran

A prominent feature of this museum is the relative homogeneity of the architectural space with its historical monuments. Moghadam Museum is composed of various parts including three courtyards, exterior, and interior yards. The first thing that will catch your eyes is the pond and candlestick. The great use of cheerful colors like light blue, purple and yellow wake a unique space. Similarly, flowering and landscaping with plants provide a very pleasant atmosphere for tourists.

On the west side of Moghadam museum is a great building that professor Moghadam and one of his students, Dr. Abolqasemi, built in the year 1966. They are decorated with tiles from the Qajar era which exhibits pieces of Iranian art. The north side of this building has a porch with several arches and beautiful columns. In the middle of this porch is a marble basin which is transferred from Fath-Ali shah bathroom. That is to say, professor Moghadam designed this basin after traveling to Spain and visiting the pool and fountain of the Alhambra Garden. The exterior and interior yards are separated by a wall called “Tajadod wall”, This wall is made of several columns, which are reminiscent of the columns of Chehelsoton Palace in Isfahan.

The next part of Moghadam museum is the interior yard. Professor Moghadam and his wife designed this yard by using patterns of the Persian rug. They built a fascinating pool and fountain in the middle, with flowers arranged on four sides. They had a glance at other countries’ architecture and culture. For example, Dr. Moghadam built a beautiful Japanese garden in the exterior yard.

In conclusion, Moghadam museum is one of the most beautiful and popular houses in Tehran. The combination of Iranian Architecture and foreign architecture is breathtaking. Most importantly, its exquisite and precious objects are worthy to visit.