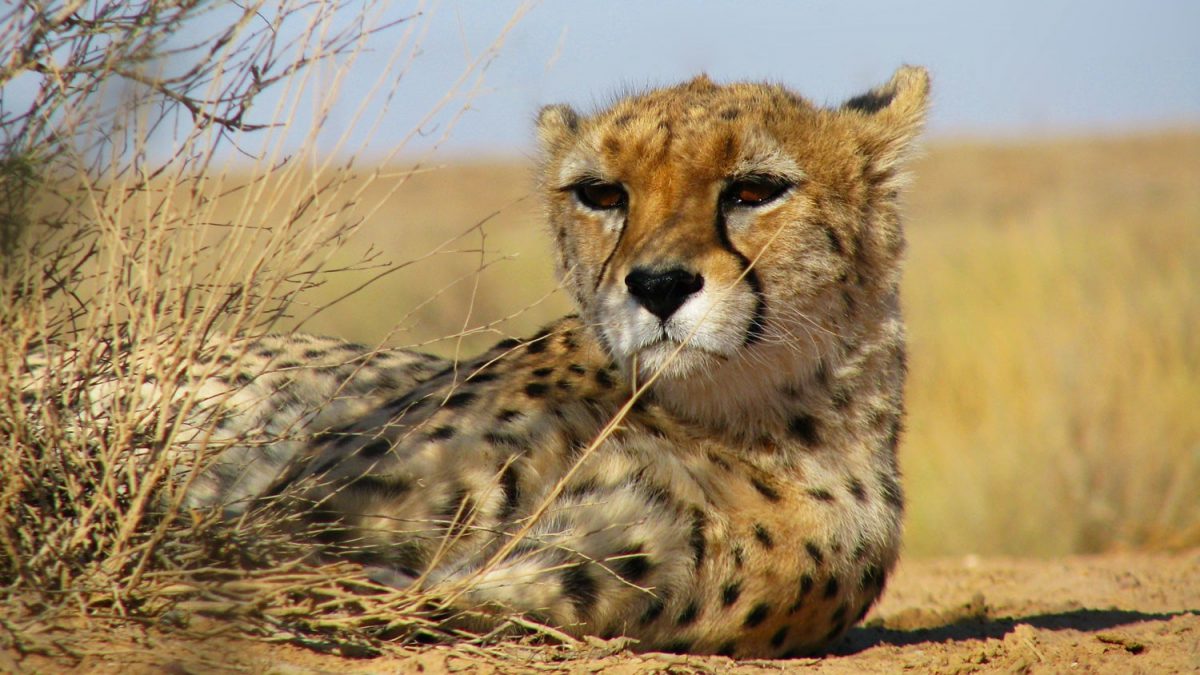 Iran is one of the biggest countries in the world with very rich and diverse fauna and flora. Among all of the plants and animals in Iran, there are two species known as endemic Persian species; Persian ground jay and Persian cheetah. Here, we are going to briefly introduce these species.

• Where does Persian ground jay live?

• Where does Persian cheetah live?

Although Persian ground jay is the only endemic bird living in Iran, in Lut Desert, little information exists about it. Pleske’s ground jay or Persian ground jay (Podoces pleskei) is a species of bird in the family Corvidae.
In Farsi, Persian ground jay’s name is “ZAGH-e-BOOR”. Local people in Lut Desert also call it “Soose’ le’ng” which drives from its jackhammer type of feeding while scavenging at the roadsides.
The Persian ground jay is around 24 centimeters in length and weighs 85 to 90 grams. It has bold boldly patterned and slightly curved slim bill adapted for digging and probing and relatively short, glossy black upper tail coverts.

They are active during dun and dusk, avoiding the noon heat. Persian ground jay show adaptations to ground living such as long, strong legs adapted to fast running and the ability to leap and bound onto boulders and rocks with great agility. Their long, curved thick bills are adapted for digging and probing. While capable of flight, they prefer running, and will readily perch on trees and bushes.
Breeding occurs in the first half of March. When the Iranian ground Jay bonds with the opposite sex the pairing is long-lasting and can stay together all year. Persian ground jay usually lay four small eggs, each one-inch-long, light cream colored mottled with reddish-brown dots.
It has a beautiful musical voice. When you hear it singing constantly in low sound, be sure that it is driving you away from its nest; it also opens its head feathers like a crown and also opens its tail and attracts attention till the danger goes away.

Where does Persian ground jay live?

This Persian species lives in desert and semi-desert areas, mostly on the Iranian plateau, though its range spreads southeastward to the Iran- Pakistan border. The highest density of the bird can be found in two areas, one on Khar Turan National Park in Semnan Province, and in Shahr-e-Babak area in Kerman Province. The closer you get to the eastern central deserts of Iran the better chance of observing them you stand.

The Persian Cheetah is another Persian species that is believed to survive and breed only in Iran. This wonderful species has a complicated history. DNA comparisons show that this Persian species split from other cheetahs, which lived in Africa, 30,000 years ago.
The cheetah differs in many respects from other cats. Apart from its non-retractile claws, it has very long slender legs and does not climb. Its pelt has solid black spots on a buff to the slightly tawny body, and more amazingly its physique is distinct from all cats. They can also be distinguished from other big cats by their smaller size, spotted coats, and small heads. Their heads are smaller than their African cousins. Their legs are shorter, their coat thicker and their neck is more powerful. And distinctive “tear stripes” that stretch from the corner of their eyes to the sides of their nose. There are no spots on its white belly, and the tail has spots that merge to form four to six dark rings at the end. The tail usually ends in a bushy white tuft.

The Cheetah is the fastest land animal in the world. It can reach a speed of over 100kph. The cheetah’s slender, long-legged body is built for speed. It can accelerate from zero to 40 mph in three strides and to a full speed of 70 mph in seconds. As the cheetah runs, only one foot at a time touches the ground. There are two points, in its 20 to 25 foot (7-8 meters) stride when no feet touch the ground, as they are fully extended and then totally doubled up.
The head and body of the adult Persian Cheetah measure from 112 to 135 cm with a tail length between 66 and 84 cm. It can weigh from 34 to 54 kg, but the male is slightly larger than the female. Nearing full speed, the cheetah is running at about 3 strides per second. The cheetah’s respiratory rate climbs from 60 to 150 breaths per minute during a high-speed chase and can run only 400 to 600 yards before it is exhausted; at this time, it is extremely vulnerable to other predators, which may not only steal its prey but attack it as well.

Where does Persian cheetah live?

The cheetah is generally considered to be an animal of open country and grasslands. They usually live in open lands, semi-desert areas, and other open habitats where prey is available. This Persian species can be found in the Kavir desert region of Iran, which includes the central part of Iran, including Kerman, Khorasan, Semnan, Yazd, Tehran, and Markazi provinces.
The Persian Cheetah also seems to survive in the dry open Baluchistan province of Pakistan where adequate prey is available. Since cheetahs rely on sight for hunting, they are diurnal: more active in the day than night. In warm weather, they move around mostly during the early morning and late in the afternoon when the temperatures are cooler.

How to buy and activate a Sim Card in Iran?