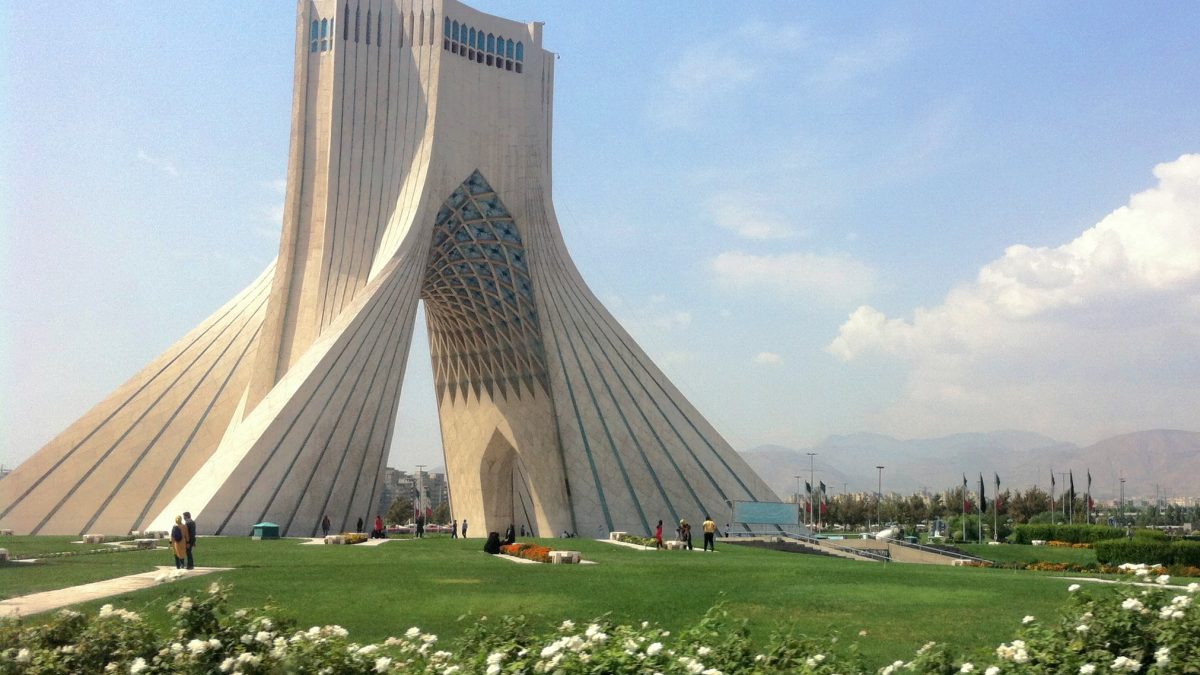 Azadi Tower (Borj-e Azadi) with its feminine image is Tehran’s most significant visual icon. Being located at the western gate of the city nearby Mehrabad Airport (the former Tehran International Airport), Tehran Azadi Tower used to be the welcoming landmark to the foreign tourists and politicians. The tower has been visited by almost all Iranians due to its importance and magnitude; that is the reason Azadi monument is regarded as the main symbol of Tehran, besides Milad Tower.

The History of Azadi Tower:

Winning an architectural competition for designing a national symbol of Tehran Hossein Amanat, a twenty four year old Iranian designer presented his amazing plan for the tower. Tehran Azadi Tower, formerly known as Shahyad Tower, was constructed in Shahyad square, under the command of Mohammad Reza Pahlavi, the last Shah of Iran, to commemorate the 2500th anniversary of the first Persian Empire. After new achievements in modernizing Iran, Shah wanted to exalt a great civilization gateway in Tehran symbolically and Shahyad Tower became his iconic promotion.

In the opening ceremony of the Tower on January 14, 1972 Shah unveiled Cyrus Cylinder (now in British Museum) which is the world’s first bill of rights, issued by Cyrus the Great around 2550 years ago. Taking its new title after the revolution of 1979, Azadi Tower (means Freedom Tower in Persian or Borj Azadi) has been always the scene of many social, political gatherings.

The Construction of Azadi Tower:

As mentioned above, Tehran Azadi Tower was designed by Hossein Amanat in 1960s. Costing around 6 million dollars, it was being constructed during 28 months by the Iranian Azadi Tower architect, Mohammad Pourfathi. Being registered in the list of the National Works of Iran, Azadi Tower in Tehran artistically presents a decent combination of modern architecture with the Achaemenian and the Sassanid architecture along with the Islamic one.

Being located within Azadi square, Azadi Tower is a sixteen side structure with an oval dome over the two stories on the top and two stories under the ground. The entrances to the Azadi monument are two huge granite doors (weights about 5.3 tons each). Two lifts along with 286 stairs are installed inside the Azadi Tower structure for making the stories accessible.

Tehran Azadi Tower is simultaneously calling the famous Iranian Badgir, the Sassanid four arches, the Achaemenian pillars, the Iranian traditional bazaars, the tile-works of Isfahan mosques, and the domes of Islamic architecture.

Azadi Tower Iran Facts: How tall is the Azadi Tower?

Tehran Azadi Tower with an inverted Y shape is 63 meters long and 45 meters (148 ft) high. Several hexagonal windows are set around the upper level, giving an amazing view of Tehran. An oval shaped dome, influenced by turquoise tile-working of Isfahan Sheikh Lotfollah Mosque, is situated on the same floor, which is visible from the inside only. The curved arch of the tower is highly inspired by the Sassanid four arches, specifically Taq Kasra, while the four huge striate pillars are the reminders of the Achaemenian gallant columns. The upper body of the tower is inspired by Iranian Badgirs (the traditional air conditioning system), and its eastern underpasses are imitating Iranian traditional bazaars, however the whole monument is totally modern indeed.

Joint by flexible sealant, 46000 pieces of stones and 8000 pieces of white marbles are used in the construction, giving Azadi Tower structure a brilliant picture. The tower was supposed to be even taller, but since the airport is in nearby, the current height was agreed. There are passageways, halls, galleries, Azadi Museum, a library and a convention Center at the base. The upper levels are open to the top, while the basement is 5 to 15 meters under the ground level. Azadi Tower interior is truly worth visiting.

Being sat in a large oval park, Azadi Tower in Tehran is sparkling within Azadi square, formerly known as Shahyad Square. The square inspired by popular Iranian Gardens, is well presenting the elements such as repetition, symmetry and parity. Water features, green spaces, and enchanting flowers are inviting any visitors to ponder in the arena and enjoy the scene. Azadi square occupies 68000 square meters and its perimeter is around one kilometer. Azadi tower is situated within the square in a way that the two large openings are facing east and west while the smallest ones are to the north and south.

Azadi square with its beautiful surroundings and the iconic tower within, has been always one of the top Tehran attractions where people stay, take photos, visit Azadi Tower interior and try Azadi Tower foods. Azadi Tower Café Restaurant is a cozy, casual place within the tower serving different Iranian traditional foods such as Kebabs. Depending on the occasions, Azadi Tower in Tehran is lit up with flags and messages of hope. Azadi Tower flags implying declaration of solidarity with other nations are among Tehran attractions which will remain in your memory. To shorten the word, no Tehran travel will be complete without visiting the iconic Azadi Tower.