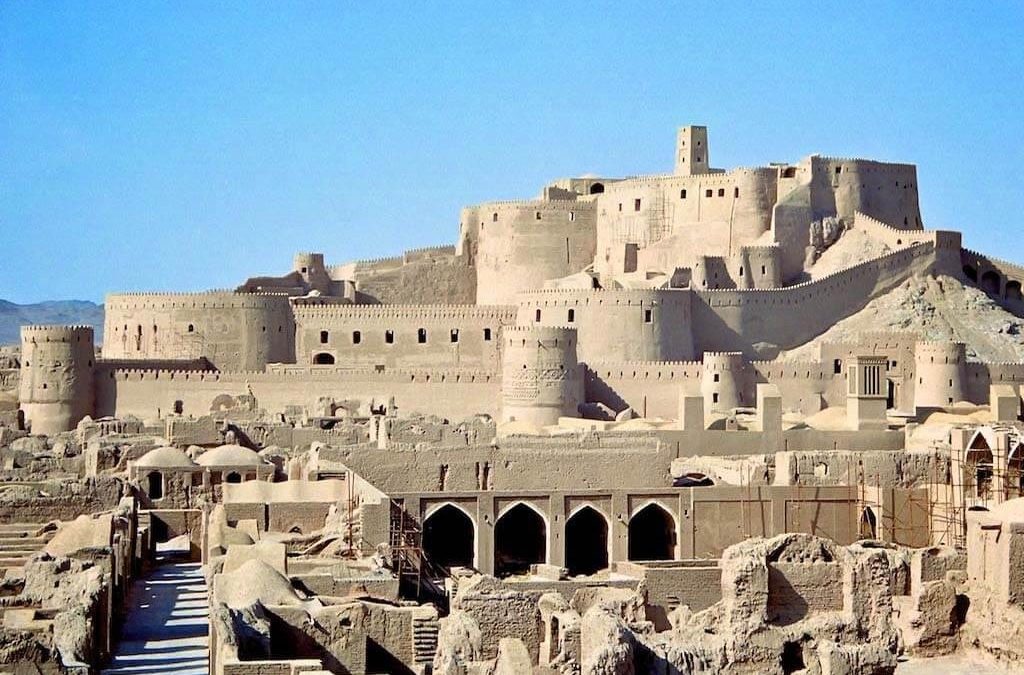 Arg-e Bam, approximately 200.000 square meters, is one of the largest collections of adobe building where Bam residents have been inhabiting for more than twenty centuries. Bam is located 2 kilometers southwest of Kerman, between the Jabal Mountains and the Blue Mountains. Bam is 1050 meters above sea level and covers an area of 19480 square kilometers. Archaeologists have discovered the oldest signs of civilization in the Birdon hills, 15 kilometers from the city. In the northeast of Bam, on the top the cliff, there was a solid fortress called by the people as the citadel. In fact, this grand building was the ancient city of Bam. Around the castle there were deep ditches that protected city from the enemies’ attacks. On December 26, 2003, the citadel was almost completely ruined by an earthquake. After earthquake the government of Iran announced the reconstruction of the citadel.

• Arg-e Bam as a historical place

There is no exact dating of the building of citadel of Bam, but based on historic sources, the first sign of human residence in the area dates back to the Achaemenians around 579-323 BC. There are some similarities between Achaemenid model of Persepolis and the citadel of Bam. During the Parthian rule, the castle developed and became Arg-e Bam, the citadel of Bam. The Parthians generally made their cities fully defensible. So, they had a great deal of experience in fortifying the city. Due to the situation, Iran in that time was similar to the Middle Ages, cities had to defend themselves from foreign invasions and rebels. Therefore, the governor’s headquarters and the separation of his residence in a way that was fully defensible had a great importance. At the end of the Parthian period, there are numerous inscriptions from Ardashir’s attacks to the Bam area.

A few years later, in 645 AD, Arabs conquered the Kerman region. During this war, Arg-e Bam endured damages. In 656 AD, the Khawarij, a group of extremist Muslims ran away to Kerman and Bam after being defeated by Imam Ali. In 869 AD, Yaqub ibn al-Layth conquered the Arg-e Bam and expelled Khawarijs. He chose the citadel as his permanent headquarter. According to the Arabian writers, Bam was a well-established market surrounded by a wide agricultural area. Bam was quite famous for its elegant cotton fabrics, its huge castle, its crowded bazaars and its palm treas. Bam also profited from a strategic location on the spice route connecting the region to the silk Road. The city was well-known for advanced silk industry and silk worm breeding.
During the Safavid dynasty, Arg-e Bam was expanded as well as the rest of the country. Some Palaces were built during this period such as the four seasons palace. After the invasion of Agha Mohammad Khan, Lotfali Khan Zand fled to the castle of Bam. But one of the most tragic historical events happened in that year. Agha Mohammad Khan Qajar killed six hundred captives in the city after entering Kerman. He sent their heads to Bam in order to threat Lotfali Khan Zand and force him to give up. After conquering the castle, Agha Mohammad Khan used the citadel as an important base to fight with Afghan and Baluchi invasion. He turned it into a military complex. During Qajar rule, some rebels rose up against Qajar king and escaped to Arg-e Bam.

Arg-e Bam was a military center until 1932, but no one was living in the old city any longer. In 1953, the castle site became a significant historic site. Conservation and restoration began gradually, although most of efforts were done after 1973. In 1993 the citadel was presented as one of the most magnificent projects of the national cultural heritage organization.
The 2003 earthquake destroyed almost 80 percent of the Bam castle. Many countries have helped Iran in rebuilding of this important cultural heritage. Japan, France, Italy supported Iran from the beginning. Japan contributed about $1.3 billion and created a three-dimensional plan of Arg-e Bam.
The Bam citadel complex is actually a huge castle where a big citadel is located at its center. The materials used in its construction are mainly clay, mortar, bole and straw and rarely bricks and palm trees. Perhaps because of the massive citadel building that is also the tallest part, they have named whole area Arg-e Bam. The area is 180.000 square meters, with walls 7 meters high and 1815 meters long. One of the most important things about the architecture of this unique structure is the two-part structure of this massive complex: the government and the rural section which both has unique features. All of the buildings in Arg-e Bam are made of raw clay bricks, which is one of the reasons why Bam ancient citadel is famous.
This historical citadel has played a significant role in Iran’s history and culture. It has protected the country from many brutal attacks. In addition, this citadel has witnessed many unforgettable tragic stories. Arg-e Bam is a symbol of Iran’s history which lies in the desert.