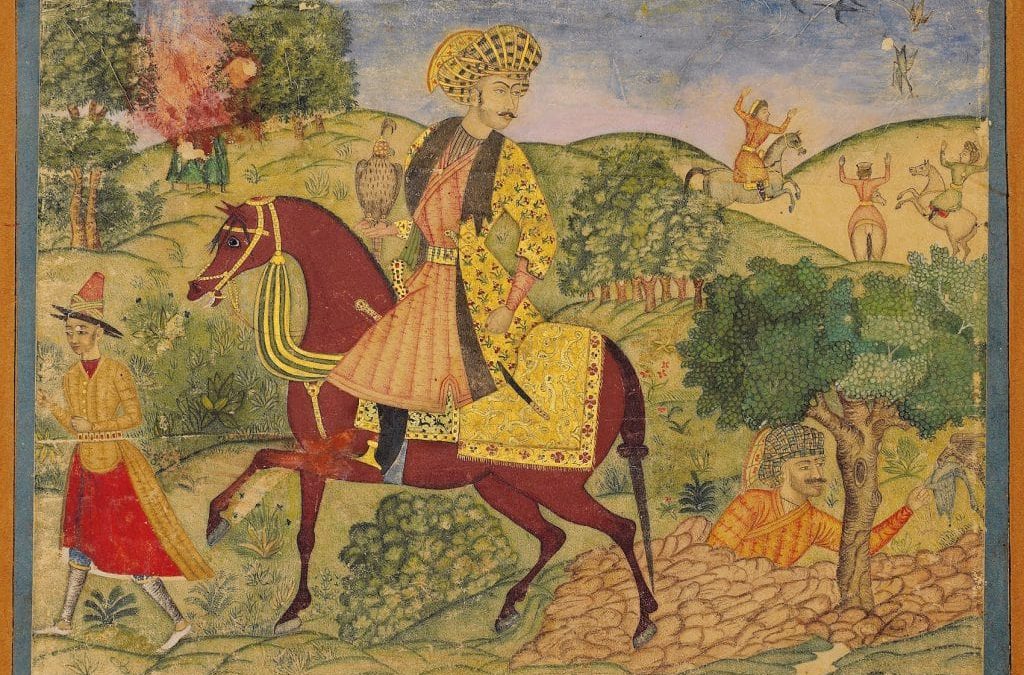 Iran has one of the most prolific art heritages in world history and has been rich in many media, including painting, architecture, music, literature, calligraphy, etc. Due to the specific Persian geography, Iranian arts have been influenced by the techniques of neighboring civilizations at different times. Islamic arts have highly impressed the arts of Iran, specifically Persian architecture. Persian arts are the keys to Iranian history and culture; therefore, understanding Iran artworks give you a presupposition to let you know what to expect from the destinations you will visit in the country.

Dating back to the Sassanid dynasty, Taq-e Bostan is a site of rock carvings, rock reliefs and inscriptions, with a great artistic, historical value. The astonishing scene of boar hunting by a Persian king is carved on the rock in Taq-e Bostan.

Iranian arts and crafts are truly ancient. Evidence of a painted-pottery civilization around Susa has been dated to 5,000 BCE (4th millennium BC), and Persian rock art dates back to the early 2nd millennium BC. Iranian rock reliefs are mostly located in Kermanshah province, and they belong to the Elamite and Sassanid eras. Persian rock art has been a common medium of art, used to glorify the king and proclaim Persian control over the territory. For instance, the Bisotoun relief and inscription, made around 500 BC for Darius the Great, is reflecting the power of the Achaemenid Empire. Iranian modern art is also rooted in the art of ancient Persia. In the following, you will read more about Persian arts and Iranian artistic genres.

The history of Persian art painting goes back to the Cave Age. Several painted images of animals and hunting scenes (dating back to 5,000 years ago) have been discovered in the caves of Lorestan, Semnan, and Fars provinces. From the historical viewpoint, the most significant evolution in Persian art painting has been the adoption of Chinese designs and coloring, which were mixed with conceptions of Persian art designs. After the emergence of Islam and the Baghdad School of painting, Iranian artists began decorating books. This art of illumination made its path of progression under the Seljuk, Mogul, and Timurid reigns.

Master Hossein Behzad, the greatest painter of the Herat School, expanded the delicate art of miniature. Master Reza Abbasi founded the Safavid School of art and altered the Persian art characteristics of painting. The most elegant examples of this school can be seen in the Safavid palaces of Chehel Sotoun and Ali Qapou. Iran artworks of the Qajar period (16th Century) then show a combination of the classic European arts and the Safavid miniature techniques. Master Kamal-al Molk is the most prominent artist of the Qajar era. Master Mahmoud Farshchian is a contemporary miniature artist who is proudly introducing this magnificent art of Persia to the world.

Persian architecture shows great variety in artistic and structural features. It is one of the Persian arts which have made their way through various dynasties, and it is still dynamic and alive. Persian architecture managed to survive, renovate, and innovate itself despite the invasions and cultural shocks. Highly influenced by Islamic architecture, it has manifested its inventiveness, specifically in vault and dome construction. Several architectural palaces and mosques of Iran are UNESCO World Heritage sites.
One of the most stunning and famous Persian arts is tiling. This remarkable Iranian art of decoration has carried on most of the Persian art characteristics of architecture. This art of Persia offers two types of techniques: marquetry tiling and seven-color tiles. Seven-color tile-working is performed by the masters or designers who draw Persian art patterns on a tile with seven colors (red, pink, blue, turquoise, yellow, black, and purple) and then bake it in a kiln to make their masterpieces ready to be used on buildings. Enameled brick making is the art of ancient Persia, dating back to 3,500 years ago.

Iranian rug weaving is severely attached to Iranian myths and philosophies. One can readily find the elements of Monism and Pantheism in Iranian arts and crafts, specifically in Persian carpet designs.

The most famous Persian art to the world is Iranian carpet weaving. This Persian art has roots spread deep into the Iranian arts and cultures, and the habits of the Persians, and their nationalized feelings. Iranian rug weaving is severely attached to Iranian myths and philosophies. One can readily find the elements of Monism and Pantheism in Iranian arts and crafts, specifically in Persian carpet designs. When the Iranian people began to know themselves as one nation, they started creating life images reflecting mostly through this excellent art of Persia: Carpet.
Carpet weavers combine graceful Persian art designs with countless colors to create these Iran artworks. These patterns used in the carpet weaving are almost the same as the Persian designs and patterns applied in the construction of Iranian gardens. The same philosophy and geometric are used, and they both want to reach a holy goal: giving the inspiration that we need to make the world a better place. As one of the most stunning arts of Iran, the Persian carpet is the heaven under your feet.

As the most applicable Persian arts, Iran handicrafts are manifesting every region’s culture and art. Iranian arts and crafts such as Mina Kari, Khatam Kari, Ghalam Zani, and Termeh weaving are global-reputed, being the most popular Iran souvenirs. By using Persian art designs, handicrafts are manifesting the art of ancient Persia. You can trace Persian art patterns, including paisley and gol-va-morgh (flower and birds), on many Iran artworks and handicrafts. Handmade arts of Iran are mostly made of wood, copper, brass, bone, silver, gold, pottery, ceramic, and clothes.

Literature reflects a nation’s thoughts and philosophies being verbalized. Understanding a nation’s literature is a key to the way they comprehend and feel the world. Persian literature dates back as far as history can tell us. Poems and texts from ancient times manifest Iranian’s decent taste and talent in verbal arts. Nobel Persian poets such as Ferdowsi, Sa’adi, Hafiz, Khayyam (translated into English by Edward FitzGerald), Attar, Sanaie, etc., dedicate a new point of view in poetry and thought that they touched the world with their words.

Poetry and music are two intermingled arts of Iran, beautifully completing each other. Music is a media describing the spirit, worldview, and feelings of each nation. Iranian music is the voice of Persian literature that passes the flesh and reaches out to the soul. It reflects the love, sorrow, internal, and external struggles of this nation. Archaeological pieces of evidence prove that musical instruments have been a major part of Iranian productions since at least 3,000 B.C. This precious art of Persia is mostly known for its unique stringed instruments. Some Iranian instruments were invented by Iranians and some were adjusted to be used in the Persian Dastgaah (Persian music system) such as Taar, Sitar, Tambour, Kamancheh, Santour (Dulcimer), Tonbak (Iranian Drum), Daf (Tambourine), and Ney (Reed).

Calligraphy is one of the most reputed and famous Persian arts because some Iranian arts seem imperfect without being enriched by decorative calligraphy. This art of Persia was mainly applied to inscriptions at the entrances of mosques, shrines, and for writing religious texts as well. The major tools used in Iranian calligraphy are pen (Qalam Ney), Pen sharpener (Qalam Tarash), Ink (Morakkab), Ink container (Davaat), and Silky ink-controller (Liqeh), and the main Iranian calligraphic styles are called Taliq, Nastaliq, Naskh, Thuluth, Reqa, Towqi, Shekasteh, and Kufic.

The cinema industry was brought to Iran by the Qajar king, Mozaffar al-Din Shah, in the late 19th century. Since then, Iran is finding its path to be one of the leading movie producers in the region. Iranian cinema has been appreciated in many considerable festivals of the world, including Oscar, Cannes Festival, and Golden Bear. Some award-winning directors such as Asghar Farhadi, Abbas Kiarostami, Majid Majidi, and Mohsen Makhmalbaf are quite well-known in the world.