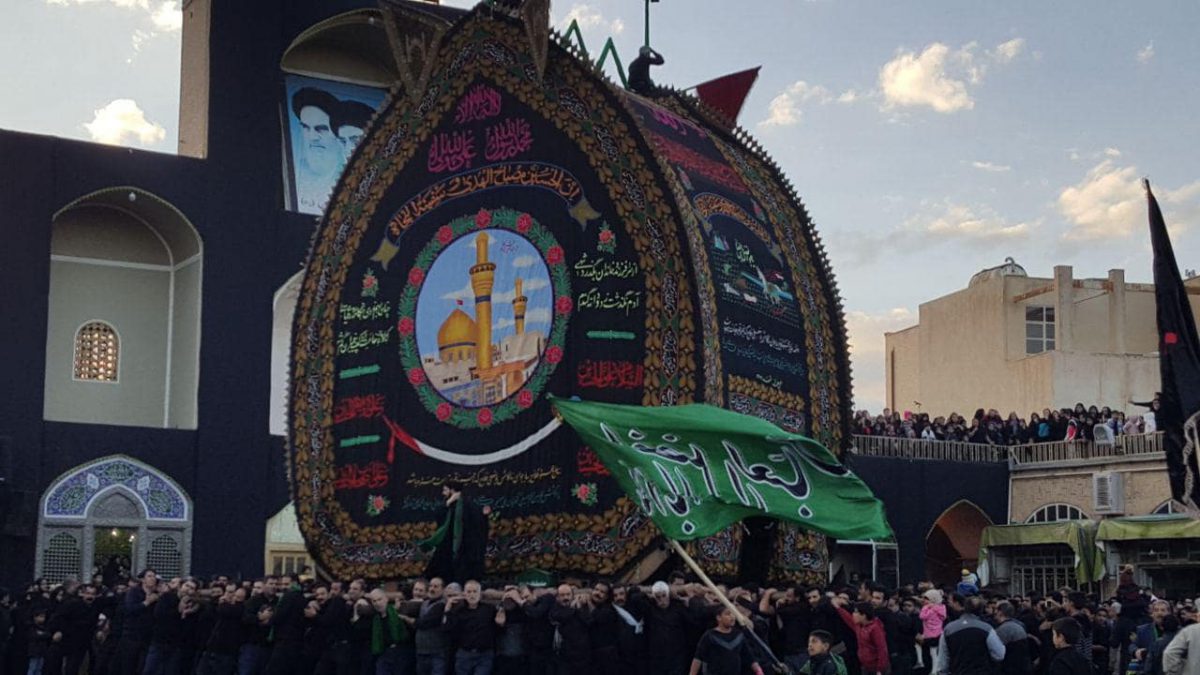 If you are planning to visit Iran and looking forward to visiting some of the most popular rituals in the country, Nakhl Gardani is one of those. Without a doubt, visiting Iran during the month of Muharram, especially on the day of Ashura, is an opportunity to experience some of the passionate religious rituals in Iran. For Shia Muslims, the celebration of Muharram is one of the biggest and significant events. Here is all you need to know about the Nakhl Gardani Mourning ritual performed on Ashura.

• The Decoration and Meaning of each part of Nakhl

Experiencing Ashura in Iran is an amazing way to gather invaluable insights into the culture of Iran, and understand the roots of Shiism. All over the country, cities and villages commemorate the event in their own way, whether it’s with a traditional form a theatre known as “Ta’zieh”, by distributing free Nazri food, or by carrying “Nakhl” structure over impressive marches. While it’s a moment of grief for Shia Muslims, these commemorations are a way for people to get closer to each other and praise righteousness.
Nakhl (means date palm tree in Farsi) is a wooden structure used as a symbolic representation of Imam Hussein’s coffin. Nakhl Gardani is the act of carrying the Nakhl form one point to another, resembling Imam’s funeral. The ritual is recognized as one of symbolic Iran’s intangible heritages.
Nakhls are constructed in various sizes, from simple ones carried by few persons, to huge structures supported by hundreds of men. The Nakhl in Yazd is one of the biggest ones in the country which carries around by a number of people.

Nakhl Gardani happens on the day of Ashura, the 10th day of Muharram, the first month in Arabic Calendar. As in 2020, it will be on August 29th. It is actually the symbolic funeral of Imam al-Husayn in Shia’s believes.
The history of Nakhl Gardani goes back to the Safavid Dynasty, about 400 years ago. The ceremony was more popular in the central deserts of Iran in a more or less similar way to how it is practiced today. Recently, the ritual takes place in some cities in Yazd Province, especially in Taft, Mehriz, Zarch and Yazd.

The Decoration and Meaning of each part of Nakhl

During the year, Nakhls kept in front of the city’s Husayniehs and they are usually covered with green or black textiles.
In Yazd, people start decorating and ornamenting the Nakhl from the fifth of Muharram. On the ninth day of Muharram, Tasu’a, the Nakhl is decorated in green. On the day of Ashura, it is ornamented in black.
Nakhl is usually decorated with mirrors on one side which is the symbol of light, simplicity, and honesty of the people who perform the ceremony. On the other side, the Nakhl usually decorated with black fabric. In some areas, expensive fabrics such as Termeh and silk are used to decorate the Nakhl to show the great respect of people toward the Nakhl. Most of the things used in decorating the Nakhl are devoted from people.

The ceremony in Amir Chakhmaq starts when the heavy decorated Nakhl is carried on the shoulders of hundreds of male mourners, old or young. Almost all the other male mourners gather in the center, around the Nakhl. Women usually walk around the Nakhl on a bigger circle or stay on the rooftop of the buildings nearby.
To carry on the Nakhl in a safe way, a man, a Sayyed (descendant of Imam Husayn), stays on the horizontal wooden column and chants Ya Husayn and guides the passionate mourners to carry the Nakhl around the square. In this way, no one is left behind from the others. They carry the Nakhl several times around the square and at the same time people around them cry out religious chants.

In different areas, there are specific manners for how to lift the Nakhl some of which are still observed. For instance, while lifting the Nakhl, each of its legs or handles should be grasped by a specific tribe or district or occupation. It was usually an inherited right: for example, in Nasrabad Pishkooh (Yazd, Iran), each leg of the Nakhl has lifted only carpenters, blacksmiths, butchers, tanners, saddlers, water suppliers, and the like. The tradition is still preserved in this area as well as in Meybod, Taft, etc.

The Nakhl of mourning and its related ceremonies are, like other religious rituals, associated with popular beliefs and traditions which have no religious origins or grounds. They are just based on popular beliefs and perhaps people’s experiences. Here are some folk beliefs about the Nakhl:
• Sterile women cross from under the Nakhl in the hope of having a baby,
• Sick children are moved over the Nakhl in the hope of being healed,
• If the Nakhl hits the wall of a house while it is being moved in alleys, it is believed that something bad is going to happen to the resident of the house. Thus, the resident of the house seeks to prevent the unpleasant event by slaughtering a sheep,
• In order for their wishes to be fulfilled, women light lamps or candles near the Nakhl on the eves of Tasu’a and ‘Ashura until the morning.

How to buy and activate a Sim Card in Iran?

Iranian Families - The Value of family in Iran