ghoghnos blog > Activities > Chaharshanbe Soori – Everything about this Iranian Festival 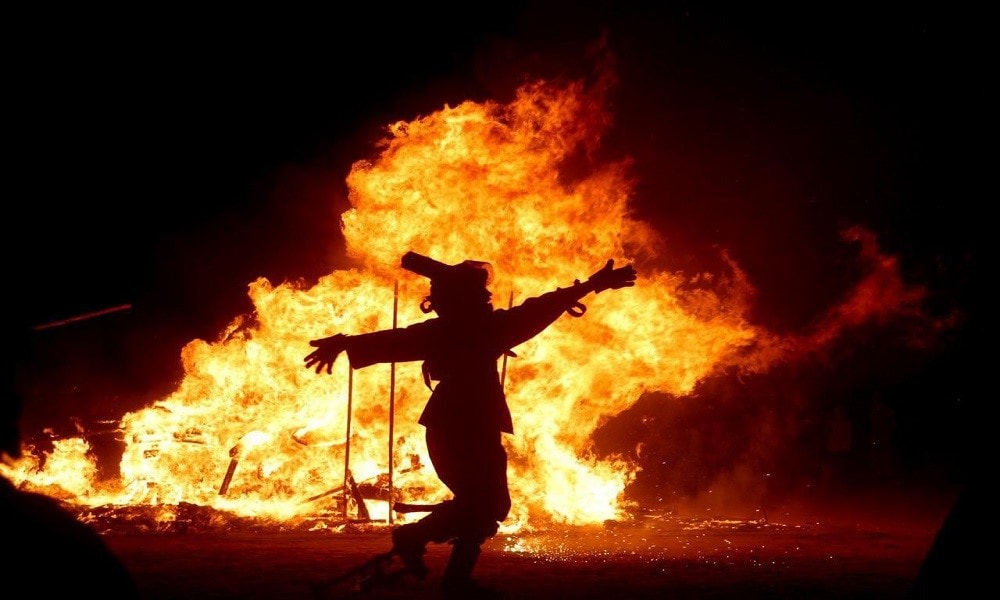 Iran has 2500 years of civilization and different ancient rituals are still held among Iranian people. Iranian ancient festivals have played important roles in people’s lives in different periods. Noruz, Yalda Night and Chaharshanbe soori are among these festivals. Chaharshanbe soori is one of the major Iranian festivals and people still celebrate it on the eve of last Wednesday of the year before Noruz (Persian New Year) to have fortune and felicity in the New Year. In this article, we provide more information about the Chaharshanbe soori celebration and its specific customs.

• Jumping over fire and tapping spoon

• Customs of Chaharshanbe soori in the past

As we said above, Chaharshanbe soori is one of the most favorite Iranian ancient festivals and its history dates back to more than two thousand years ago. The word “soor” in Chaharshanbe soori means fire and symbolizes red color which either can be referred to fire or red color of the face that shows healthiness. This festival is also called a fire festival. It is customary that on the last Wednesday of the year, people gather together and make a big fire.
This festival begins on the sunset of the last Tuesday of the year and lasts up to the end of the night. It is believed that jumping over a fire brings fortune and takes away sickness and misfortune in the coming year. For this reason, people jump the fire and sing “sorxi-ye to az man, zardi-ye man az to”, literally meaning “[let] your ruddiness [be] mine, my paleness yours”. It is believed that fire cleans the body with its warmness. In fact, by commencing spring, ancient people made a big fire to last up to the morning and strengthen the sun.

Jumping over fire and tapping spoon

In fact, it can be said that Chaharshanbe soori is a custom for welcoming spring and Noruz. In ancient Iran, the fire had great importance and it was considered everywhere as a symbol of purity and goodness. There are different stories about jumping the fire. In the beliefs of ancient people, fire cleans everybody with its warmness and diminishes their impurities. The warmness of fire takes away sickness, and it is the main source of life.

Shahname which narrates ancient Iranian stories, tells a story about the origin of jumping over the fire. In the story of Siavash, for proving his innocence, a big fire is made, he should pass the fire healthy to show his innocence. For this reason, jumping fire has become a custom in Chaharshanbe soori.
Another common custom in Chaharshanbe soori is the tapping spoon ceremony. In this ceremony, children and teenagers use a cloth to hide their faces, then they go to neighbor’s houses by tapping a spoon on a bowl and request them special nuts. These nuts are usually a symbol of luckiness that takes away bad events.

This ceremony is no longer held in different parts of the country, but it was an enjoying recreation for the children in the past. Ancient Iranian people believed that dead people return to their family in Chaharshanbe soori night, so people try to remind their memories in this night. Also, different types of food are cooked in Chaharshanbe soori. Some people cook Ash Reshte (Persian soup) in this night to control their conditions in the New Year.

Customs of Chaharshanbe soori in the past

In the past, there were different and very interesting customs in Chaharshanbe soori, but by passing time, these customs have been faded. One of these customs was breaking the jar. In this custom, People drop a new jar from the roof. They believed that breaking the jar takes away problems and disasters from the family. This custom has been still performed in some points of Iran. Another custom was eating special nuts for Chaharshanbe soori. These nuts were a mix of salty and sweet nuts and its believed that eating them will make ones prays to be realized.

Another old custom of Chaharshanbe soori was Bolony. It is still performed in some points of Iran. In fact, Bolony is said to a jar which was in the old houses for containing foods. In this ceremony, people gather around Bolony and everybody drops an object in it. They also write different poems on the paper and drops in the Bolony. Then, a child is chosen to pick a piece of paper and one object from inside it. It is usually considered that the paper belongs to the owner of that picked object.

Chaharshanbe soori festival includes making fire and jumping over it. But different cities of Iran have different customs for Chaharshanbe soori and every geographical part has different customs for this old celebration. In Shiraz, for example, people usually go to the holy shrine of Shahcheragh and pass under its orb.
In Tabriz, it was custom that people went on the roof and poured water on other people. This is an ancient custom that dates back to the Sasanian era. Ancient people also poured water on each other in the celebrations like Noruz for happiness and fortune. Also, it was custom in Zanjan to put money in the throwing jar from the roof to bring blessings in the house.
Iranian people celebrate Chaharshanbe soori with some different customs which each of them has different reasons.

Iran having different people and rich civilization is an attractive and interesting country regarding traditional customs. Noruz Celebration and Chaharshanbe soori festival that is a prelude to it, are still held among Iranian people. These celebrations and rituals play very important roles in Iranian culture. Getting familiar with these celebrations help to retain them in the future.

Chabahar - a beautiful city with dozens of tourist attraction

Is it a good Idea? Traveling to Iran with kids?